In Kununurra we stayed at the Kimberlyland Caravan park, our friends Catherine and Dean Guse were staying there and it was the first caravan park we have come across that has a family camping rate (and a cheap one at that, only $39 for a powered site!). The van park was fully booked, so we got to go to the ‘overflow’ area (an unpowered area right on the lake). We setup the van and then headed into town. Kununurra was the largest ‘town’ we’d been to in a while, so we went to the shops and stocked up all our supplies. After shopping, we had dinner with the Guse’s and swapped stories about the last few weeks since we’d seen them last.

The next day we headed out again to do some shopping, but this time for a few clothing items, we also needed to look into getting one of our caravan tyres replaced as it had a bubble forming and we wanted to get it fixed before it blew out.  While we were in town we stopped in at the Kimberley Fine Diamonds shop just to have a look at the pink diamonds (Liz wasn’t too disappointed when we didn’t buy any J). Once we had finished in town we headed out to the Zebra Rock gallery and while we were there the kids feed some bread to the huge cat fish which live in the river.


That night we had been invited to have dinner with Gary and Nikki Alexander (the local Anglican minister) and some other church members as well as Greg and Jocelyn (another BCA nomad couple who had been working with Gary and Nikki for about 3 weeks).  We had a lovely BBQ dinner, and the kids had a great time playing with some other kids from the church.


Thursday the 14th June we headed to Gary and Nikki’s house early to do a bit of work.  Mike helped Greg (one of the other BCA nomads) with some gardening and Liz helped a little bit with Gary, Nikki and Jocelyn labelling jar of Mango Jam and Mango chutney that Gary and Nikki sell at the local markets.
We worked from 9am to lunchtime and in the afternoon we headed out to have a look at  Ivanhoe Crossing. Mike chucked a line in - but no fish, we did spot a croc in the water. 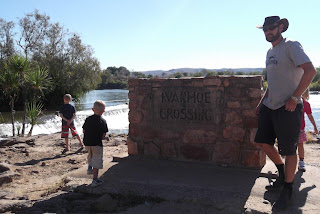 We also went to the sandlewood factory.  Later that afternoon we went to the Pump house restaurant for a milkshake and to watch the sun set over the Lake, we watched a sea plane land while we were there and we saw hundreds of catfish swimming around - hopeful for a feed, we were hoping to spot a croc - but we didn’t.

That night we went Crocodile spotting at the lake next to the caravan park.  With our torches you could clearly spot their bright orange eyes shining back at you. There were a lot out there and we believe they were all freshwater, but you never can be too sure.


Friday was  Gary’s day off, so we left Gary and Nikki in peace (Greg and Jocelyn headed to El Questro for the day) and so we had a lazy morning around the caravan.  We could pick up “ABC 2” on the TV, so the kids got to watch some TV in the morning (a novelty for them).  We did loads of washing and then went for a quick look around town. The kids also had a play at ‘Celebrity tree park’ but it was pretty hot (35 degrees) so we went back to the caravan park for a swim after lunch.  That afternoon we drove out to Mirima National Park (sometimes called the Mini Bungle-Bungles (but we didn’t think they looked anything like the bungle bungles).  After that, we drove out to ‘swim beach’ just to have a look.
We went to the markets on Saturday Morning (they are on every Saturday during the ‘tourist season’ (dry season) in Kununurra.  We had a browse around and bought some bits and pieces.  Mike was keeping his eye out for a stockwhip to buy on the trip and met a man who made them (and was selling them at the markets) and so Mike had a good chat with him and ended up buying a one later that morning.  After the markets, we dropped Mike to Gary and Nikki’s house to start doing some work with Greg, they built a garden shed that had been bought some time ago but never put up.  This took about 5 hours to fully construct.  Mike finished the work about 3pm.  In the meantime, Liz and the kids had been having a quiet day around the van.  When Mike got back, we all had a swim in the pool to cool off.  That night we all went Crocodile spotting again.


We went to church on Sunday morning at St James, Kununurra.  There were lots of people there and we had a great time meeting people at the church and joining in the fellowship there.  After church we headed back to the van for lunch before heading to Coles to do a big shop to re-stock our very small pantry!  It was very hot (it had been hot for a couple of days) and it was still 35 degrees at 3pm, so we went for a swim in the pool at the caravan park.  The rest of the afternoon was spent with the kids playing around the van and meeting more new friends from the park.  Mike had to take part of the caravan fridge apart which seemed to had broken (the burner wouldn’t stay lit) and after a clean of the parts he re-assembled it and it seemed to work OK again (for now!).

The next morning (Monday) we were due to pickup a new caravan tyre from the local tyre shop, but the truck that was bringing it up to Kununurra (from Perth) broke down in Port Hedland, so the tyre wasn’t available when we went to pick it up.  Mike made the most of being there and got a wheel balance done on the car.  Monday was a pretty lazy day for us; after we’d finished school, we just hung around the caravan park.  That afternoon the Guse family returned from their camping trip to El Questro, so the kids played together and we caught up over dinner.
at Tuesday, June 26, 2012