Darwin with Grandma and Grandad (Part 1)

Our first full day in Darwin was Tuesday 3rd July.  We were all really looking forward to Darwin because this is where we were going to meet Grandma and Grandad (they were flying in from Sydney to spend a week with us).  Additionally to this, none of us had ever been to Darwin before and so we were very excited at having a look around the capital of the Northern Territory.  Grandma and Grandad weren't going to arrive until Thursday, so we had a couple of days to check off the long list of things that we needed to get done while we were in a big city.  The most pressing need was to get a new water tank installed in the caravan, so we dropped the caravan into the service place on Tuesday and then went to the Casuarina Shopping centre and did heaps of shopping before going to a huge free water park (called Leanyer Water Park) for lunch and a play.  The kids had a great afternoon using the water slides, swimming in the pool and playing on the playgrounds.


We picked up the van in the afternoon and it had a brand new water tank installed.  Unfortunately we couldn't put an 85L tank back in (apparently it wouldn't fit), so we've had to settle for a 59L tank instead - but that should be OK for what we need.

We hadn't completed our shopping list, so the next day we went back to Casuarina for a few hours to buy the rest of the items we needed.  After lunch, we decided to have a big clean out of the van (because it had been a while since we'd pulled everything out and had a good cleanup).  Mike also tested the water tank and found out that it leaked from a hose :( so he had to fix the connections.  He also did a few other odd jobs around the van (it's quite amazing how there's always something that needs doing to the van!  For example, now that the water tank was fixed, the water pump started failing intermittently and we had to order a new pressure switch for it to fix!  It seems that there is always something to do).  Nonetheless, we got all the things we wanted to do done before Grandma and Grandad arrived the next day.


Thursday the 5th July was the day that grandma and grandad arrived - which was very exciting for everyone.  We were out and about that morning picking up some mail, going to the hardware and doing a few other odd jobs.  Howard Springs (where our caravan park was) was 20Km out of the city, so we hadn't yet ventured into Darwin, so we had a brief drive around the city before driving back to the van.  We did a few more odd jobs on the caravan (and the kids played on the jumping pillow) while we waited for Grandma and Grandad to arrive.  They arrived about 3pm and so we spent the rest of the day catching up with them at their cabin.  It was great to see them after almost 9 months of being away.

Grandma and grandad had hired an 8 seater car so that we could all travel around the city together (which worked really well), so the next morning we transferred the kids booster seats from Bruiser into the hire car and then drove into the city to visit the Darwin Museum.  We had a good look around the museum (at 'kids pace :) ) and after we'd finished there, we went to have a look at the Fannie Bay Gaol.  We decided to have lunch at the Leanyer water park and then played at the water park for a while before heading back to the caravan park for another play and then dinner.


The high tide on Sat 7th July was in the morning which meant that the Aquascene Fish Feeding was on between 8am until 11am, so we drove down to Doctors Gully to go to the fish feeding.  We stayed there and fed huge amounts of fish for an hour or so and all enjoyed watching the vast array of sea creatures that came in for a feed.

After the fish feeding, we went to the World War 2 Oil Storage Tunnels to have a walk through this historic part of Darwin.

When we'd finished in the city, we drove out to the Palmerston Water Park.  this is the newest of two FREE water parks in Darwin!  We were very impressed with how the Northern Territory seems to cater for families with free things (like the water parks) and also in a lot of places Kids were free or very cheap compared with similar things in other parts of the country).  When we'd had enough fun at the water park, it was time to head back to the van park.


That evening our friends, the Guse's, came over with a challenge for us to help them find and break into a coconut, so we all went on a coconut hunt, found a coconut and had some fun trying to crack into it.

One of the things that we wanted to go and see in Darwin was Crocodylus Park, so on Sunday the 8th we all drove to Crocodylus Park to have a look at this famous reptile park. 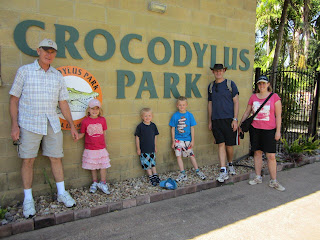 Crocodylus park is a crocodile farm that breeds Saltwater crocodiles for their skins and their meat.  The park runs feeding tours to feed their salties and then at the end of the tour you can hold a baby crocodile.  We joined the midday tour and listened to the guide as she gave us lots of information about crocodiles.

We watched the guide feed some of the crocs with bits of chicken.  After the tour, the guide got some baby crocodiles for us to hold.  We all had a hold, and Josh (who is normally a bit reserved when it comes to holding, patting or riding animals, was first in line to hold the croc!  He really has grown up a lot on our trip and it's great to see him getting the confidence to hold a baby croc). 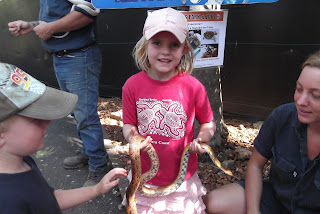 Crocodylus park has 3 distinct sections: the Crocodile part, a 'zoo' with lots of other animals, and a museum.  We wandered around the zoo and saw the lions, and tigers. kangaroos and all the other animals in the zoo section. It was a really hot day that day (and very humid - which is quite strange for Darwin in winter) and the kids were a bit exhausted after wandering around the park for almost 2 hours, so we went into the airconditioned museum to have a look.

We had lunch on the balcony at Crocodylus Park before driving back to the caravan park.

Darwin's Mindle Markets operate on Thursday and Sundays from 4pm to 9pm, so at about four o'clock we drove out to Mindle beach to stroll around the busy markets.

Grandma and Grandad bought Natalie and Sam some Balloon characters (which were made while we waited) and Natalie was very happy with the fairy she got.

When we'd finished walking around the markets we bought some dinner from some of the food outlets and sat down to eat our dinner on a nice warm evening.


After breakfast the next morning we all spent some time around the caravan park.  We had a dip in the pool (which was fresh, but nice), jumped on the jumping pillow, and played in the playground.  Time always seems to go pretty fast when the kids are playing or swimming and it wasn't long before it was lunch.  We weren't driving Brusier (our 4WD) much while we were in Darwin because we were using the people mover that grandma and grandad had hired.  Mike tried to start Bruiser that morning and found that we had a flat battery (which had happened in Jabiru also!).  So after lunch, on our way to the city, we had the battery tested and it was apparently not healthy and needed replacement!  So with a new battery in the boot of the people mover, we made our way to the wave pool in the waterfront precinct for an afternoon of fun.  The wave pool was a real bargain at $12.50 per family.  We spent a good 2 hours at the wave pool.  Josh, Natalie and Sam all loved riding the waves on the tubes and boogie boards which were supplied by the pool.

Once we'd had enough at the wave pool, we jumped back into the hire car and drove back to Howard Springs.  That night, grandma and grandad had the kids over for dinner and a sleepover in their unit, so Mike and Liz went out to dinner in the city.  We went to Darwin's jetty and looked for somewhere to eat.  After a bit of looking, we found a fantastic buffet at a restaurant called 'The Jetty'.  We had a beautiful seafood dinner and then went back to the van for an uninterrupted nights sleep (thanks grandma and grandad!).  The kids really loved their sleepover with grandma and grandad.
at Tuesday, July 31, 2012