The Bloomfield Track and Cape Tribulation

After leaving Lakeland, we headed toward Cape Tribulation via the Bloomfield Track.  We didn’t quite know what to expect with this drive because we had heard that it was a '4WD only' track and we didn’t quite know how bad it would get.  After leaving the highway (which goes up to Cooktown) we drove along more dirt road (with some bitumen sections).  The road got a bit windy but was a pretty good road most of the way toward Wujal Wujal.  We stopped for lunch at a beach on the Coral Sea just outside of Wujal Wujal.  After lunch, we got to the Bloomfield river and this is where the Bloomfield track really starts.  The Bloomfield track winds up some very steep mountain ranges and we quickly found ourselves in low range with our diffs locked in order to get up the dusty and rocky hills.  Some of the steepest sections were sealed to protect the road, but we were still glad we didn’t meet an off road tour bus coming the other way as it was quite tight!  There was also one decent water crossing on the track (with a couple of other smaller ones) and if it had been wet at all, we’re sure that the track would be impassable.  Nonetheless, once we were over the ranges, we dropped down some steep hills to the other side and found ourselves inside the Daintree Rainforest and almost at Cape Tribulation.  The Bloomfield track was much shorter than we had anticipated, but we were really glad we took that route to get to Cape Trib.  We stopped at Cape Tribulation Beach to have a look and do a very quick boardwalk through the Daintree rainforest to a lookout platform. 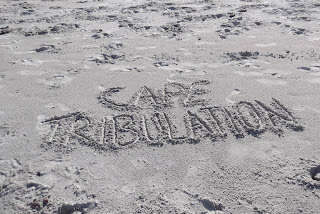 We had been given a tip that Cape Trib camping was a good place to go (thanks Geoff and Julie), so we left the beach and went to book in there for 2 nights.  Once we’d completed our last ‘setup’ for our Cape York Camping trip, we went and explored the beach.  There are crocodiles and marine stingers in these waters, so we weren’t game to go for a swim (unlike other people) but we did manage to find a coconut under one of the many coconut trees growing along this stretch of coast.  It was a bit of a tough job opening the coconut, but was very satisfying when it was all ready to be cracked and eaten.

Mike did a bit of fishing (but didn’t catch anything) and the kids played on the sand for a while until it was time to start thinking about dinner and bed.

Wanting to make the most of the full day that we had planned at Cape Trib, we got going early on Sunday 9th September and headed south from Cape Trib toward the Daintree River.  Our first stop was a boardwalk which snaked through rainforest and mangrove swamps.  It was a great walk and the kids enjoyed seeing all the different types of tress and the diversity of the rainforest.


After our boardwalk, we decided to have some morning tea at ‘Floravilla’ which is an organic ice-creamery.  We bought a couple of tubs and sampled some of their delicious icecream.  Our next stop was Cow Bay.  We all went beach-combing at Cow Bay, and Liz & Natalie made a shell Mermaid while Josh made a picture of Mike as a belated Fathers Day present.

We enjoyed the beautiful Cow Bay for about an hour before heading on to have lunch near the Daintree Discovery Centre.  After lunch we walked along another rainforest boardwalk.  The rainforest is certainly very different to the vegetation that we’ve seen for about the last 6 months, and it was really quite beautiful walking through the forest and seeing all that the ecosystem has to offer.

On our way toward the Daintree river Ferry (which was as far south as we wanted to go), we stopped at a lookout where we could see the mouth of the Daintree River.
We finally got to the Ferry that crosses the Daintree river, and so we hopped out of the car and watched the ferry cross back and forth a couple of times.  We’d seen everything that we wanted to see between Cape Trib and the Daintree river, so when we left the ferry, we drove straight back to our campsite.  There was a bit of time before dinner, so we headed out onto the beach for a walk.  While we were walking along the beach, it started to rain on us.  This was the first bit of rain we had seen on our camping trip (which was such a blessing because camping with tents in the rain is not great fun).  It’s really another example of God blessing us so much along our Big Aussie Road Trip (like the 10 months of perfect weather we’ve had so far) and we do feel His presence a lot as we travel around this wonderful land that he created.  As we walked along in the rain, the kids tried to catch raindrops on their tongues to ‘have a drink’.  We all got quite wet, but enjoyed the feeling of being rained on for the first time in a long time.

We’d heard that the Wood Fired Pizza at Cape Trib Camping was very nice, so we decided to treat ourselves to an ‘end of camping’ dinner to celebrate our 14 nights in the tent.  We had a beautiful dinner of wood fired pizza and even had a dessert pizza (Banana and Nutella which was very tasty).  While we were eating dinner, we got chatting to a couple (Dan and Amy) and their 2 little girls who were from Victoria and have done a similar trip to ours (over to WA and around the top) in about 7 months.  It’s great to chat with like-minded people (with kids) who are doing a similar thing to us and it was a nice way to spend our last night before reuniting with the caravan in Cooktown.

Monday the 10th September was the last morning of our ‘Cape York Camping Trip’ and so we packed up the tents for the last time (at least for a while).  We were all packed up and ready to go by 8:45am so we decided to go for another walk on the beach.  The kids had found a rope swing and a cubby house the day before and wanted another turn on the swing.  As we were playing on the Beach, Dan, Amy and their 2 girls came along and so we spent quite a while chatting while the kids played together.  It had been a bit of a windy night the night before, and 2 more coconuts had blown down from the trees, so Mike de-husked them and we kept them to eat in the future.  Soon it was time to leave Cape Trip camping and head back along the Bloomfield track toward Cooktown.  Our first stop on the track was a Beach that we saw and wanted to have a look.  When we walked out onto the sand, there were thousands of soldier crabs that swarmed across the beach which provided a few minutes of fun for the kids as they caught some before they buried themselves in the sand.  Mike also found another coconut and when we got back to the car he opened it on a tree stump so that we could munch on some fresh coconut flesh.


We wanted to have a look at the Bloomfield falls, so we stopped and walked along the short track to the waterfall.  There was lots of water in the river, but it would be a much more impressive sight at the height of the wet season.
After the Falls, we drove to the historic “Lions Den Hotel” where we had a look around. It was an interesting pub with lots of bric-a-brac hanging around the bar as well as some very interesting plants including a Jade vine and a Canonball fruit tree. 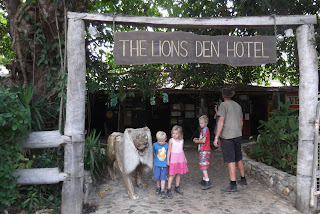 We stopped to have a look at 'Black Mountain' on the way back to Cooktown, and our last stop on the way back was at Keatings Lagoon where there was a bird hide next to a large lagoon.  We spent a while looking at the Magpie Geese and other water birds in the lagoon.  As we were leaving the bird hide, Liz spotted a small, thin tree snake which had slithered onto the handrail.


It was then time to head into Cooktown and pickup our caravan.  We had really enjoyed our trip to ‘the top’ and our Cape Trib Camping trip.   We’d been away from our caravan for 14 nights and were looking forward to getting back into a ‘permanent structure’ where we wouldn’t have to setup and packup the tent each time we wanted to move on.  We checked into the Big 4 in Cooktown where we’d spend the next 2 nights.

Tuesday 11th September was the day to try and get the van organised again - and all our camping gear unpacked and washed up.  Unfortunately it rained quiet heavily that morning so not as much washing got done as we would have liked.  We didn’t do much else that day.  The next morning we found that we had a flat tyre on the car (I was surprised that it had a nail in it, as opposed to splitting due to the rough conditions we had put them through for the last 2 weeks!), so we organised a late checkout at the van park and dropped the flat tyre in to be repaired.  We thought we’d use the time to go and visit the James Cook Museum.  We had a good look around at all the interesting things they had on display there.  The Museum had been organised very well and we were glad we went and had a look.  Soon it was time to hook up the van and drive out of Cooktown – continuing our drive down the east coast. 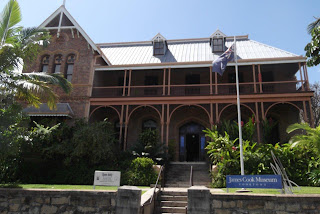