We said our goodbye to Cairns on Sunday the 23rd September and drove a little way South.  We had heard that “The Boulders” (which is a free camp 40Km south of Cairns) was pretty good and had some good swimming holes, so we made our way there.  We found the campsite and were reversing the van into a spot when the March Flies descended in droves!  It reminded us of our stay at the Shannon National Park in Western Australia, and so we decided that we wouldn’t stay at The Boulders for the night.  However we wanted to see The Boulders, so we took the van down to the day use area, and had a look through a beautiful valley with massive granite boulders lining the river bed.
It was a hot day, so we all went for a swim in the refreshing waters to cool down.  After consulting our trusty ‘Camps 5’ Book, we found a cheap, Council run campground at Bramston Beach, which is east of Babinda.  We drove out there and found a nice grassy, sunny spot to park the van for a few nights.  After being in the shade of Palm Cove for a week, our solar panel really needed some sun to charge up our Batteries (as this was another unpowered camping ground).


Because it was school holidays, there were lots of other kids around the campground, and it didn’t take long for Josh, Natalie and Sam to make some new friends; Addison, Anna, and Josh to name a few.  They spent hours playing Bullrush, Bionicles, Lego and tiggy (tag or tip as we know  it) with their new friends at the playground.
Bramston Beach was a beautiful sandy beach, but the water (like so many of the beaches in North Queensland) was quite murky.  We swam in the beach (even though there could be stingers and crocodiles present – these are unlikely to be around, but are possible to be there) and it was good to have a cool dip and splash around in the small waves.
We didn’t spend much time in the water, but enjoyed the swims that we did have while we were there.  The kids also loved playing with all the other kids and riding their bikes around the campground.  We had 2 nights at Bramston beach before moving a bit further south.


Our original plan was to stay at Flying Fish Point, but after a quick drive-by, we decided to push further south and go to Mission Beach.  Upon arrival at Mission beach, we found a council run campsite (with power and water) for $18 per night (which was $2 cheaper than we’d been paying for no power for the last week and a half!!), so we booked in for 2 nights.  Sometimes it pays not to look online and book ahead because I am sure we would not have found this place if we hadn’t just driven right past it.  Admittedly, the amenities weren’t the greatest we’d used, but the campground was right on the beach and we could have a look around the area while we were staying there, so it suited us just fine.


Mission Beach looks out to Dunk Island, and the ocean was actually clear (not murky) which was a nice change.  We spent a bit of time in the water during our stay at Mission Beach, but while we were in the area we also had a look at South Mission Beach, went for a walk to the lookout at Clump Point, Mike did some fishing (with no luck) and we just enjoyed walking along the Coconut tree lined beach. 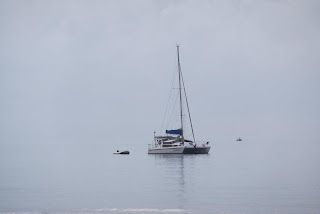 We left Mission Beach on Thursday the 27th September and drove to Forrest Beach (east of Ingham) where we had found a campground attached to the Forrest Beach Hotel for $20 a night (with no power).  Having no power isn't really a problem for us because our Solar Panel and batteries allow us to still run the fans (which we’ve installed over the kids beds to help with sleeping on hot nights) and to charge/run all our electronic devices.  Anyway, we setup at Forrest Beach (which wasn’t a great swimming beach, so we didn’t swim at all while we were there) and spent the afternoon playing cricket, soccer, Frisbee and throwing the tennis ball to each other because there was a large grassed area (with no other campers) that we could play on – it was great fun.


One of the reasons we wanted to stay in the Ingham area was to go and see the Wallaman Falls (which is Australia's highest, permanent, single-drop waterfall), so on Friday the 28th September we had a day touring around the local area to see the sights.  Firstly, we stopped at Lucinda, which is a town that has the worlds longest Sugar Cane Jetty.  There is so much sugar cane growing in the areas North and South of Ingham.  We have had to stop at numerous ‘Cane Train’ crossings to let the cane trains pass with their many carriages of harvested sugar cane.


The kids have been quite fascinated with the whole cane process and watching the sugar cane being grown, harvested, transported and then finally shipped out on the loooong jetty at Lucinda.


After Lucinda, we drove to the Wallaman Falls.  Wallaman Falls is an incredible waterfall (even in the dry) which drops a staggering 268 metres in one drop.  We stopped and watched the water tumbling over the cliffs for a while.  We decided not to do the 2Km walk down to the bottom (although that would have been amazing) because the kids were tired and the track is not a maintained walking trail so we were unsure of the condition.  It also started raining on us a little when we were there. 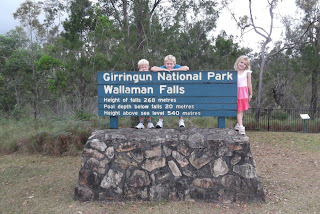 After some lunch, we had a quick look at the camping ground at Wallaman Falls and stopped to have a walk along the river, where we saw 15 turtles swimming in the river below us.

Our final destination for the day was the Tyto Wetlands, just outside of Ingham.  We drove back from Wallaman Falls (about 50Km) to Ingham and after a brief stop at the visitor information centre, we went out to the Tyto Wetlands.  We thought there was a boardwalk around the wetland, so the kids took their scooters, but unfortunately there was no boardwalk!  Nonetheless, the kids did well scooting along on the grass, and it was a break from walking so they didn’t mind at all.  The wetlands weren’t particularly spectacular and we didn’t see too much wildlife, so we were glad we only did the short walk and not the full 4km loop track.


It was quite late by the time we got back to the caravan at Forrest Beach and we were all quite tired, so we all took it easy before enjoying a lovely corned beef dinner which we'd cooked in our Dreampot that morning.


We felt that we’d seen everything that we wanted to see around the Ingham Area, and so decided that we would leave Forrest Beach and drive to Townsville on the morning of Saturday 29th September.
at Saturday, October 06, 2012