We thought that it would be a nice ending to our Big Aussie Road Trip to finish it where it began, almost 15 months before - in Canberra.  So on Sunday the 30th December 2012 we drove from Wangaratta to Canberra.  We were going to stay at the same place we had stayed when we first came to Canberra, but Exhibition Park in Canberra (EPIC) was closed due to the Summernats starting in early January.  So we stayed at the Carotel Motel and Caravan Park, just near EPIC.

On New Years Eve, we spent some time around the van in the morning before heading out to the shops for a few supplies. We spent a few hours getting some of the things we needed and having a bit of a drive around Canberra and we had a pretty quiet rest of the day.  That night we ventured into Canberra City to watch the 9pm Fireworks.  We were thrilled that we could leave our caravan after 8:30pm, drive to the city, get a park and be at the fireworks ready for the 9pm showing!  We certainly couldn't have done that in Sydney!  We all enjoyed watching the fireworks, and were glad we went in to see them.


When we got back to the caravan, we lit some sparklers to celebrate the beginning of 2013.
New Years Day meant a lazy, slow morning around the caravan and then before lunch we drove to the National Museum because the kids had been wanting to go back to 'K-Space' ever since leaving Canberra 15 months ago!  K-Space is an interactive 3D movie where you get to design houses and vehicles of the future and then watch it on a 3D movie.  The kids had a few goes of designing houses and vehicles before we had a brief look around the Museum (and watched the Circa rotating theatre). 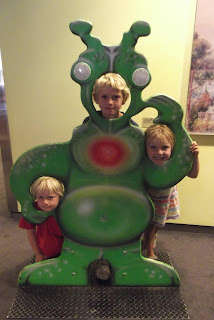 We stopped for lunch by the lake just near the National Museum and sat in the shade on what was quite a hot day (although the strong wind made it nice and bearable).
After lunch we drove to the National (Art) Gallery to have a look at some of the paintings and sculptures which are on display in our Nation's Capital.  We decided fairly quickly that the National Gallery wasn't the place to take 3 kids who are used to going from playground to playground.  They were very good in the Gallery and managed not to touch anything, but it was a more stress than it was worth so we moved on fairly quickly.

After the National Gallery, we came back to the caravan park and swam in the pool for a much needed cool-down followed by dinner and an early night to make up for the late night the night before.
The last full day on Our Big Aussie Road Trip was on Wednesday the 2nd January, 2013.  We started the day with a cooked breakfast; which we ate in the warm morning sun at our caravan.  At about 10am we jumped into the car and drove to Questacon - the National Science and Technology Centre.  Unfortunately there was a fire evacuation when we arrived, but it wasn't too long before we were allowed in.  Questacon was so much fun for all of us.  Everything in the centre is hands-on, and by lunchtime we had only looked through 3 levels.  So we had a picnic lunch outside and then went back inside to complete the rest of the levels. 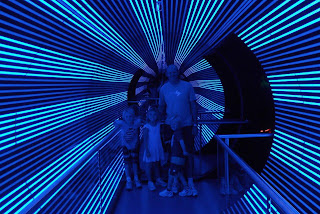 Toward the end of the day we watched a show called 'move it', which was done very well and demonstrated many scientific principles in a really creative and interactive way.  The kids sat through the 45 minute presentation and enjoyed every minute of it.  By the time we left Questacon, it was 4pm and we were pretty exhausted!


We had decided that our last dinner on the trip would be the same as the first dinner on our trip (which was at Hogs Breath Cafe to celebrate Liz's Birthday, 15 months earlier), so when it was time for dinner, we headed down to the same Hogs Breath Cafe we had been in at the start of our trip, and had a great meal to celebrate our travels around this marvelous continent.  It was a great way to finish our last full day on our trip.

loved reading about your trip, have been following for months.
Now what? back to reality or another trip planed? I wish to do the same soon.
Good luck with what you do next.

I loved reading your blog. Australia really is a beautiful place.
After 15 months travelling I don't know how you're going to settle back into life in the burbs.

The Aussie bush is the best school room for any young (or old)Australian.

How has this trip changed you and your family?