We left Coolgardie (a quick stop on our way down from Kalgoorlie) and had quite a long driving day (about 5 hours to travel the 400Km’s to Esperance), but we were in Esperance by about 3pm which included a few quick breaks to stretch the legs.


During our long drives we’ve been listening to a lot of Audio Books, which the kids love.  We’ve listed to the Faraway series numerous times, as well as bible stories, the Lighthouse keeper stories, Winnie the Pooh stories and a few others.  Auido books  are great because the kids can still look out the windows (or draw etc).  We do have the DVD players setup in the car but we’ve only used them half a dozen times in the last 3 months and they certainly have a use at times, but we find that we can limit their use quite well.
When we arrived in Esperance, we pulled into the ‘Bushlands Caravan park’ - which was a very basic caravan park 5km out of town (with horrible tasting Bore Water – complete with sand!) and very basic facilities – but we have found that with Caravan Parks, you generally get what you pay for -  which is fine by us.  The rest of the day was spent with a quick drive around town and picking up a few supplies at the supermarket.


On Wednesday we looked at Esperance’s ‘Pink lake’ (named because the high salt content allows only pink coloured bacteria to grow) and then went into the main part of Esperance.  Liz and the kids played at the park on the foreshore and had a ride on the miniature train that was riding around the park, while Mike took the car to change the position of the tyres to allow even wear while we drive. 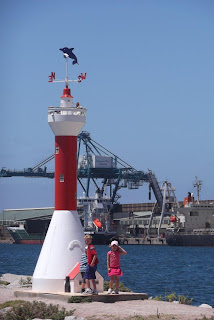 When the car was ready again, we drove to the Rotary Lookout which gives a great view of Esperance and the coastline.  The main features of the coastline around Esperance are large granite rocks which form many islands off the coast, and also form the headlands between beaches in the area.  It is a beautiful part of Australia.

After lunch, we donned the swimmers and went down to the (very windy) beach.  The water was a little bit cold, and the windchill made it feel much colder too, but it was a brilliant sunny day and we all had a good splash around in the water for the afternoon.  All 3 kids were very tired when we went to bed that night.

Thursday was Australia Day and we had found out from the Visitor Information Centre that there were some activities down at the foreshore, so after a Bacon and Egg Breakfast, we went to have a look.  We were really impressed with the show that Esperance put on – and how well attended the event was.  There were lots of stalls, as well as displays by the Fire Brigade and Police.  There were Also vintage car and ‘muscle car’ displays.  The kids got free ice creams which was a bonus.  It was a beautiful sunny 30 degree day as we walked around all the displays and stalls.  We stopped and watched the competition at the skate park for a while too.  After we’d seen everything on offer, we got out the kids bikes and the kids rode along the pathway from the foreshore to the jetty (probably about 1km).  When we got to the Jetty, we saw a massive Sea Lion basking in the sun.  It was a busy morning, but we enjoyed the ‘vibe’ of a Country Australia Day.  Normally on Australia day we would try to see our friends The Hodges, The Blythes and the Reeves (a tradition we’ve had for quite some time now), but this year we were all in different parts of the country – but we were thinking of you. 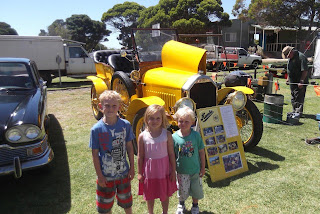 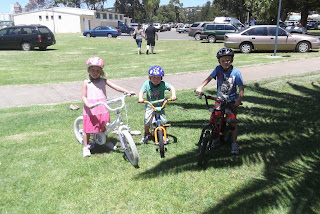 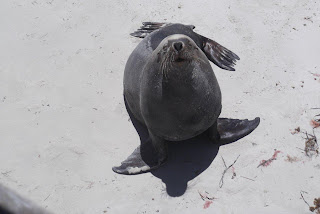 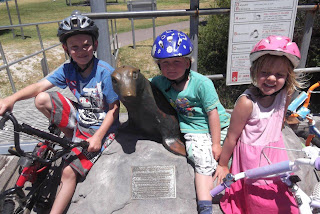 In the afternoon of Australia day, we went back down to the same beach as we had been to the day before (but this time it was pretty packed with people) and had another good (but windy) swim.

Not far from Esperance is the Cape Le Grand National Park.  We planned to spend quite some time in the National Park (maybe 2 weeks) to settle Josh and Natalie into school and have a bit of time in one place (because we have been travelling quite fast from place to place since we left South Australia) and so we were looking forward to getting down to the National Park and having a look around there.
at Sunday, February 05, 2012