We pulled into Kalgoorlie about mid-afternoon on Saturday the 21st January.  On the way to Kal, we saw a road sign saying that the Road Trains on that stretch of Highway can get to a maximum length of 53.5 metres! No wonder they can take over 2Km to overtake (not that we’ve done that of course – it would be them overtaking us if anything!).


We knew that summer in the Outback of Australia was going to be hot (you’d be a bit silly to expect anything else), so we booked into a Caravan Park that had a pool – which was a great decision.


After we’d setup the Caravan (which normally takes about 15-20 minutes) we went for a drive.  We needed to do some shopping and wanted to see the Superpit, so we headed to the superpit first to have a look because we figured that the Supermarket would be open quite late.  The Super Pit is certainly a sight to behold.  It is an absolutely massive hole in the ground!  It is almost 4Km’s long, 1.5Km’s wide and 460 metres deep.  The observation lookout gives a good view of the pit.  Massive Dump trucks look like tiny toys driving up the roads out of the pit.  The kids (especially Sam and Josh) loved seeing the Super Pit because one of their favourite activities on our trip when they have some time is to play with diggers and dump trucks in any dirt available to them. 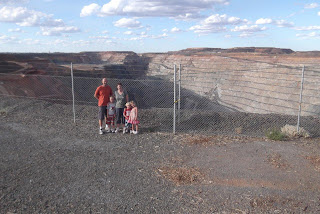 After leaving the superpit, we headed to Woolworths, but found they closed at 5pm on Saturday (and are closed on Sundays!! ).  Our supplies were fully depleted after our Nullarbor Crossing, so to the kids delight, we picked up a pizza and headed back to the caravan.


Sunday was forecast to be 39 degrees (and it was 46 degrees around midday and got over 47 in the mid-afternoon).  We went to church at Kalgoorlie Baptist.  The service was shorter than we thought it might have been (less than an hour) but was great to get along to.  Because it was so hot on Sunday we didn’t do much after church.  We did some shopping at the IGA (which does open on Sundays) and then swam in the pool a few times.  We also went to the Superpit again to try and see the 1pm Blast, but nothing happened, and a big storm rolled in that afternoon.


On Monday morning, We went to the Water Reservoir lookout which is the destination for the pipeline that runs for hundreds of kilometres in order to deliver water to the town.  After the lookout we went to a great park called Hammond Park, but the day was heating up again (over 40 again that day), and so we didn’t spend too much time at the park – just enough to have a look around the park at some of the exhibits (like a replica castle) and at some of the animals (Birds, Kangaroos, Emus) as well as have a play on the play equipment there.


Later that day, we went and had a look at the Kalgoorlie Museum which had quite a lot of interesting things to see including the Gold Vault which contains a lot of examples of Gold in different natural forms as well as a large Gold Bar.  At the Super Pit Shop (a shop in Kalgoorlie) they told us that the Blast from yesterday had been cancelled, but that 2 blasts were scheduled for 1pm on Monday, so we headed up to the lookout to watch the blasts.  The wind was blowing from behind us, so we didn’t hear or feel anything, but we did see the blasts well. 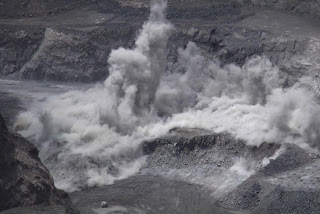 We all cooled off in the pool before a late lunch, then we headed out for a drive to another nearby mine to have a look (it was nowhere near the size of the Super Pit, but was still pretty impressive).


We left Kalgoorlie on Tuesday (bound for Esperance), but went to Coolgardie to have a look at the town first.  We stopped at the Ben Prior Park and looked at many relics that were on display from the ‘Golden days’ of the town (excuse the pun).  After a quick stop at the Coolgardie lookout, we left for Esperance.

"After leaving the superpit, we headed to Woolworths, but found they closed at 5pm on Saturday (and are closed on Sundays!! )." - welcome to 1960's Australia!!!