We left Ceduna and headed to Fowlers Bay for our first night,  its only about 160km so not too far, the first 60km we drove was in pouring rain, but by the time we reached Fowlers Bay the rain was gone and the sun was shining.  About 15Km's short of Fowlers Bay, we clicked over our first 10,000km's since we left Sydney on 13th October!  Fowlers Bay is another beautiful bay with a long jetty and kilometres of massive sand dunes.


After setting up the van and having lunch we headed down to the jetty to do a bit of fishing,  no luck this time.  Next we headed to the sand dunes,  the kids had a ball running and jumping and sliding down some of them and then we spent quite a bit of time digging and creating things with the sand before heading back to have dinner.


Day two - we had another short driving day only about 180 Kms to the Nullarbor Roadhouse,  we based ourselves here and headed to the Head of Bight for a look,  such a  beautiful spot, it would be amazing to see all the whales there in winter,  they can get up to sixty each day.


After heading back to the road house we headed out to see Murrawijinie Caves,  it was a 12km drive on a bumpy dirt track.  There were three different caves, big sinkholes really.  Mike and the kids ventured into one that was very accessible just to have a look. 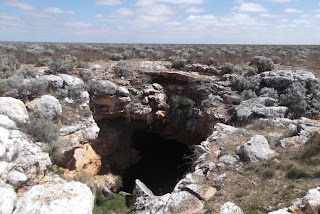 Day three we headed for the Western Australia boarder.  We stopped at all the beautiful lookouts to see the Bunda Cliffs along the way.

When we arrived at Border Village we had a brief stop at the roadhouse before heading to the Quarantine road block to cross the border. Once we had been through the road block we stopped and had lunch before heading down the road to Eucla our next stop for the night.

After setting up the van we headed out to the ruins of the Old Telegraph station,  the kids had a great time scrambling through the ruins before heading back to Eucla for a play in the playground and an Ice cream for afternoon tea.


On day four we had an early start.  When we crossed the border into Western Australia we said goodbye to daylight saving and changed to central time.  We had decided that today we would have a long haul day,  we didn't know how far we were going to travel we just headed off to see how far we could get before we had had enough.  There is nothing out there, the place names on the map that you would think are a town is just a road house.  At Balladonia Roadhouse, there was a museum with Nullarbor history, as well as some pieces from Skylab (a satellite which came crashing to earth in 2000 and rained space junk over the area).  About 300kms west of Eucla we changed time zones again now we were on Western time, so we put our clocks back another hour, the further we went the more time we gained.  So we went much further than we thought we might,  after approx 10hours of driving (including stops) and only 110km from Norseman we pulled into the Fraser Range Station,  a real working sheep station that are using part of their land as a caravan park and motel.  It was such a beautiful place,  the landscape was just amazing.

Day Five we were awake extremely early,  our body clocks (or should we say, the kid's body clocks!) were telling us that it was 7am,  the sun was up,  but the clock only said 4.55am.  We weren't planning for an early start, we really wanted a slow morning after our big day the day before,  so we put on a DVD until 6.30am then had breakfast.  After checking that we did have the correct time (and we did) we headed off from Fraser Range Station and drove into Norseman.  In Norseman we went to IGA to get some snacks and bread for lunch (this is the first supermarket we had seen since leaving Ceduna) then headed up to the Beacon Hill Lookout and then to a park that had old mining equipment in it, before hitting the road again bound for Kalgoorlie.


We enjoyed our Nullarbor crossing. The kids travelled really well, and we only turned on 2 DVD's throughout the 5 days of our Nullarbor Trip.  It really is quite an experience.  EVERYBODY on the road waves to each other as they pass (breaking the 'Caravan to Caravan Only' mould - which is the usual for country driving with a Caravan in Tow).  It isn't a desolate stretch of road because there is quite a bit of traffic on it all the time.  One tip for people who are planning this drive in the future - make sure you fill your water tanks in Ceduna (or Norseman for those travelling West to East) because all the 'caravan parks' and roadhouses will NOT give you any water.  We were fine, but we didn't completely fill our tanks in Ceduna and wished we had - just for a bit more piece of mind.

Our plan is now to spend quite a bit of time in the south of Western Australia (after Kalgoorlie), because we don't want to get too far up north until the wet season has finished.  There's plenty to explore down south of WA, so I'm sure it won't be a problem having a good look around.
at Monday, January 23, 2012

Wow, in Western Australia now! Enjoy Australia Day on the other side of the country. Hopefully you have better weather than NSW, where it is wet wet wet! Keep up the updates, love hearing about your journey. Love Ali