Before we get onto our next Blog entry (which is quite a long one) we wanted to let you know of some things we've added to our 'www.bigaussieroadtrip.com' website...

1) There is a 'Kid's Blog' Page on our site where we have entered Josh's Weekly School Journal's (from last term).  Also Josh, Natalie and Sam have also entered some thoughts (Josh did his own, and Natalie and Sam Dictated to us and we put it on the website).  We intend to have the kids update an entry about once a week, so if you periodically check back there may be something new.

2) We've been struggling to find a good way to show our progress (becasue the Google Maps view only shows the last 1000km's or so.  So we have put a picture at the bottom of our page which reflects what we have drawn up on our own 'Map of Australia' which is stuck on our wall and follows our progress around the country.  Hopefully this will be easier to see how our overall route (but the Google Maps view is still there too).

Basically, if you haven't looked at the 'www.bigaussieroadtrip.com' for a while (and just get updates via email by subscribing using the link on the website), then it may be interesting to have a look at the actual website on the few pages we have setup.


Now that's out of the way, let's get into Port Lincoln to Sceale Bay (pronounced Scale Bay)...

We checked out of the Port Lincoln caravan park on Tuesday the 10th January knowing that we'd only be hopping over to the other side of the Eyre Peninsula (just near Coffin Bay) for our next night, so we didn't have far to travel that day.

We drove to Coffin Bay to have a look (and were glad that the town was named after an acquaintance of 1900's Explorer Matthew Flinders not anything else!).  We pulled in at a lookout to get a view from up high before heading down to the town centre.

We drove through town (which isn't very big) and went to the Boat Ramp to stop for morning tea.  While we were at the boat ramp, an Oyster farmer pulled his boat onto the Jetty (Samuel was very excited because he got to see 2 very exciting things - a Tractor, and a boat being pulled from the water).

We left Coffin Bay and headed for our next night's accommodation - Farm Beach.  The Farm Beach campground was only $5 per night (for the whole site - but no power or water was supplied) and was on a beautiful beach (which you could drive onto).


After we setup the Van and had a late lunch, we headed out in the car to explore the surrounding areas.  We drove along the road and saw a kitesurfer, so stopped to have a look at the beach there and watch the Kitesurfer.  It turned out that the lady who was surfing was Jacqui Hockaday - South Australia's Number 1 Kitesurfer who lives just behind the beach where she was practicing.

While we were chatting to Jacqui's coach (and fiance) he said we should go and have a look at Gallipoli beach not far from where we were, so we headed down a 4WD track to find the beach (which was used to make the 1981 Gallipoli film).  We found the beach and scrambled down the track to have a walk on the beach.  It was a really nice little beach with steep sides all around.  We walked the length of the beach (but didn't swim - much to the kid's disappointment).


We went back to Farm Beach and decided to let the tyres down and go for a drive on the sand to explore Farm Beach.

After a little look around we drove back to the campsite, climbed trees (at least the kids did), had dinner and went to bed.

On Wednesday, we headed for another cheap campsite called Walkers Rock just past Elliston, so we stopped in at Elliston to have a look at the town and visit the information centre/op shop/library/community hall.  The kids had a quick play on some play equipment just outside the information centre while Liz grabbed a couple of supplies from the shop.  We drove to the Elliston Jetty and walked out to the end before we jumped back into the car and headed for Walkers Rock - 9km past Elliston.

When we got to the campsite, another couple were just packing up their caravan (and they had a pretty good spot) so we decided to go to the beach to have a look while we waited for them to move out of their spot.  The beach looked really inviting (and the kids had spotted some huge sand dunes that they wanted to climb), so once the caravan was all setup, we went back to the beach to explore the sand dunes and have a swim.

Mike had brought his fishing rod (along with some squid Tentacles from the squid that he caught at Port Lincoln) and so he went fishing for a bit while the kids played on the sand dunes again.  After a short while Mike pulled in a Sand crab!  We kept the crab and ate him for dinner - Delicious (except the kid's didn't really appreciate the taste).

The next morning, we went back down to the beach for another explore (and another fish).  Mike caught another crab, but we let him go.  On the walk back to the caravan, Liz spotted something moving along the rocks just at the edge of the water, and it turned out to be a fully grown Blue Ringed Octopus!   Needless to say we kept our distance, but it is certainly something else we can add to our list of 'Australian Native Animals we have seen in the wild' - the list is quite long now :)

We packed up the Van, and because it was still hooked up to the car we were on the road again fairly quickly after we got back from the beach.

We had read in one of the travel brochures that there is an old bakery (now a residential house) that has a wood fired bread oven.  The owners of the house have re-ignited the business (excuse the pun) and bake their own bread which they sell by the side of the road and at local businesses.  The brochure said that if the 'Open' sign is displayed, then there will be bread to be bought.  We passed this house and the 'Open' sign was out so we stopped in to buy some "Colton Bakery" Wood fired bread and it was absolutely delicious.  We ate sticky buns for morning tea and had their rolls for lunch - it was really tasty.

We all really wanted to go and visit 'Murphy's Haystacks' which are large Pink Granite boulders protruding from the ground on the top of a hill.  For any Alison Lester fans out there, they cast their shadows on Murphy's Haystacks in their 'Are we there yet' Book - A great read, which we read to the kids often as part of their bedtime stories each night.

Anyway, we pulled into Murphy's Haystacks and had a good look around. 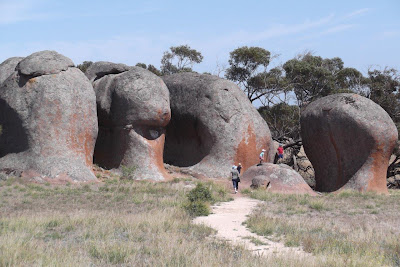 We tried to cast our shadows on the rock, but it was about lunchtime, so our shadows weren't so big!  We had lunch in the caravan before we headed onto the dirt road bound for Sceale Bay (pronounced Scale Bay).

Some Enterprising landowners in Sceale Bay have setup the 'Sceale Bay Bush Campground' to attract campers to the area and make a few dollars on the side.  It was a good campground with some basic facilities but was very much bush camping.  We pulled in, unhooked the van and then went for a drive into 'town'.  There are only about 40 permanent residents in Seale Bay, but a few more holiday homes.  It was a very nice little town.

We still had plenty of daylight left, so we drove out to Point Labett.  This is where the only Permanent colony of sea lions on the Australian Mainland can be found.  We drove out to have a look.  The viewing platform is quite high off the water at the top of a cliff, so you can see the sea lions, but they are quite a distance from you (binoculars were handy to have here).


While we were viewing the sealions, we got invaded by honey bees, so we said goodbye to the sealions and jumped back into Bruiser to head back to the caravan for dinner and bed.  It was a very quiet and dark campsite which is quite nice sometimes.