The drive from Sceale Bay to Streaky Bay was only about 30Km's, but the road was dirt the whole way and only 10km's of it was graded and it was quite rough the rest of the way so much so that our eggs in the fridge fell off their shelf and smashed everywhere.
We booked into the Streaky Bay Caravan Park for one night.  The caravan park was chocka block full of people - the busiest park we've stayed in yet, but it was a beautiful park, right on the beach with good clean facilities and a good Kiosk.  We ended up staying at Streaky bay for 2 nights because we thought it was such a great place.
Once we'd setup the van, we explored the park, and then went to find the Great White Shark at the roadhouse/visitor information in town. 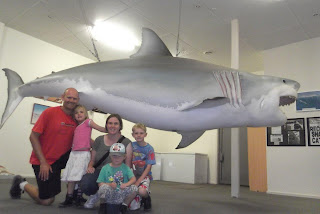 It was quite a hot day that day, so after looking at the shark, and looking around the town, we went back to the park to swim. There were thousands of tiny little jellyfish in the water that bumped against your legs when you waded through the shallow water, it felt very strange because you couldn't see them. The kids loved them, they spent a long time catching them and making a 'Jellyfish farm' in a hole they dug in the sand -but the tide kept going out and leaving the farm stranded!

On Saturday, we did the loop drive to Cape Bauer. There was lots to see along the way, we stopped at Hally's beach as well as the whistling rocks and the blowholes before continuing the loop back to Streaky Bay.  The Blowholes weren't working (because the swell wasn't big enough - and it was low tide), but we got to hear some whistling rocks and see a different (tiny) blowhole working. 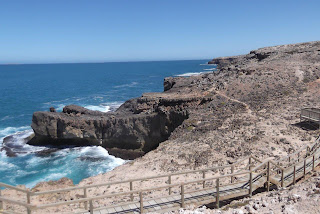 That afternoon, we went to the Jetty in town and went fishing.  Both Liz and Mike managed to catch some fish, but nothing worth keeping - but it was a bit of fun, and we also saw two dolphins near the jetty. 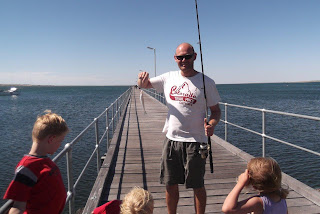 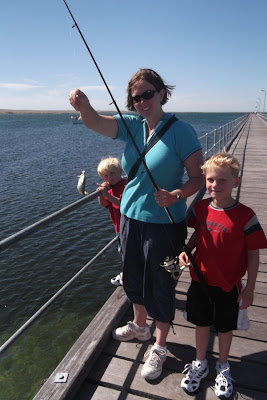 We finished off our day with a nice swim down at the beach - there were still some jellyfish, but not quite as many as the day before.

We've found that the water in South Australia is really really salty.  Whenever you go swimming, the towels, rash vests, and your hair is so encrusted with salt that you need a good freshwater shower after the swim!  This is fine except when we're free-camping and wanting to save water.
at Saturday, January 21, 2012