From Port Augusta we headed to Whyalla, which is only about an hour away.  As we drove out of Port Augusta, we passed the junction where you turn Left to go to Western Australia, and Right to go to the Northern Territory - we decided to turn left this time. 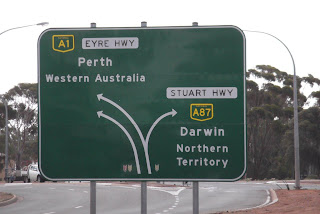 Whyalla is home to the OneSteel steel works and its the first thing you pass as you enter the town.  The next thing you pass is the information centre and Maritime Museum with the landlocked HMAS Whyalla next to the centre.

So we pulled into the Information centre and went straight onto a guided tour of the ship which was lots of fun and very interesting.  After the ship tour we had a walk through the museum which again was very interesting and the kids loved the model trains that they had set up. 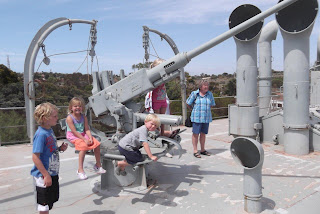 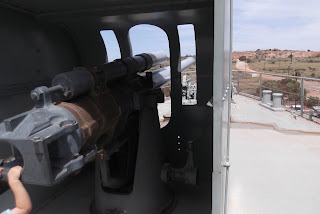 After spending about an hour and a half at the information centre and museum we headed to the caravan park and set up for the night.

We arrived at lunch time and it just so happened that there was a sausage sizzle on in the camp kitchen (every Wednesday) so we joined in.  While eating lunch the park manager was telling us about the Dolphins that follow fishing boats into the marina, they come right up to the wharf and you can touch them, unfortunately the wind had picked up (blowing a gale actually) so there were no boats out.  So we headed to the lookout at Hummock Hill.


The next morning the wind had eased so we headed to the marina to see if there were any fishing boats, but no boats.  After the car got a service (because it had started to overheat on long drives) we headed out along the jetty there were lots of people fishing.  Most of them also had nets down catching blue swimmer crabs.  When we reached the end of the jetty we found a Dolphin swimming around, so we spent quite a bit of time watching it and then we watched some other people (who had come prepared with Fish) feed it, it wasn't long before a second dolphin came along as well.  When we had had enough we headed towards the car and spotted two more Dolphins in the Marina. 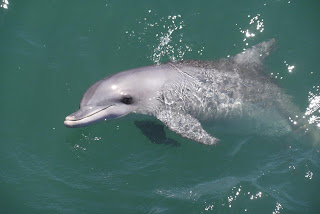 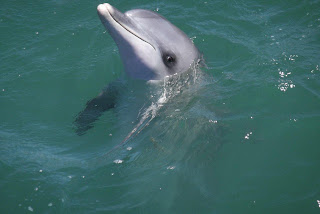 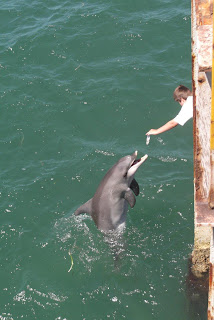 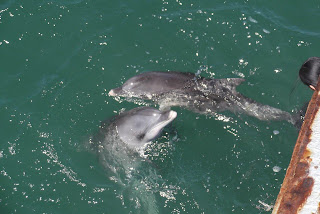 We had packed a picnic lunch so we headed out to Iron Knob (about 50kms away) to do a tour of the old open cut mine.  We arrived at the township of Iron Knob, and found it to be a bit of a Ghost Town.  At it's peak, it housed 3000 people, but the whole town now looked pretty deserted.  BHP stopped mining the Iron Knob mine in 1999.  We went to the information centre to meet the guide who would take us on a drive around the township, and to the top of the old section of the mine.  The old section of the mine was mostly dug out by hand - one bloke filled 17 railway cars (70 tonnes of ore) in one shift!  It was a very interesting tour and we were very glad we went out to Iron Knob - the "birthplace of the Australian Steel Industry".


We still had lots of daylight left (and dinner in the Dreampot was ready) so we drove from Iron Knob out to Point Lowly to have a look at the area as well as a lighthouse that is there.


It was a big day, but we were glad we had 2 nights at Whyalla, which allowed us to have a good look at everything we wanted to see in the area.