While we were staying in Mount Gambier, we did some research on the Internet and found a Caravan Park where we could stay for Christmas.  It was called Wirrina Cove and it happened to be the cheapest one we could find on the Fleurieu (it is peak period, and caravan park fees with 3 kids in tow are not all that cheap!).  We booked in for an unpowered site for 5 nights.

We drove from Adelaide to our caravan Park on Friday the 23rd December and arrived quite late in the afternoon.  We setup the site and had some dinner and that's all we had time for that day.

On Christmas Eve, we had a brief look around the Wirrina Cove Marina and the kids had a good climb all over the rocks that made the breakwall.  Liz's foot was now healing well enough to try walking without crutches and so Liz strolled along the breakwall (not climbing on the rocks just yet).

We wanted to take a look at Victor Harbor (and do some last minute Christmas shopping), so we drove to the other side of the Peninsula.  We completed our Christmas shopping when we got there which took us until lunchtime.  After lunch by the water the kids had a play in a well equipped playground near the jetty to Granite Island.  We saw the horse drawn tram that takes people across the jetty over to a 'tram stop' on Granite Island, and decided that we'd take a return trip over to the island.  The tram was really quite fun.  We sat inside (downstairs) on the way over to the island, and watched the Clydesdale plod along - taking us to the island.  It took about 15-20 mins for the tram to get across to the island stop, and when we got there the kids and Mike walked to a lookout to get a good view of the island and surrounds.  It was getting to be quite a hot day, and so we didn't stay out on the island for too long.  On the way back, we sat up the top of the tram (which was quite hot) but gave a good view of the area as well as the bridge we crossed to get back to Victor Harbor. 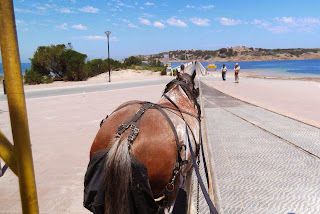 After the tram ride, we were all quite hot, so we donned the swimmers and went for a nice refreshing swim at the beach just next to the jetty - this was well worth doing before the drive back to our campsite on the other side of the Peninsula.  The kids were very excited about christmas the next day, and there was much anticipation in the air about the presents that they would receive when they woke up the next morning!

A late night was had by Mike and Liz as Mike Assembled a new bike for Natalie and Liz wrapped all the other presents.  We knew that this year would be 'smaller' than some years, but we were surprised at how many presents were under our 'tree' in the caravan! So thanks to Grandma's and Granddad's, Nanna's and Pa's, Aunty's, Uncles, and friends - we really appreciate your thoughts and presents.


Christmas Day 2011
The Mason's were up quite Early on Christmas day this year!  At about 6:30am, the kids all enjoyed looking through their stockings and seeing what Santa had brought them while they slept, then it was time for the rest of the presents, followed by Bacon and Eggs for breakfast before heading off to church.  We had looked for a Church to go to in Yankalilla and decided on the Anglican church.  The service was a 9:30am service, and so along with about 40 others, we attended a very formal prayer book service (with a sung Eucharist - which was a first for us).  The kids did very well sitting in the pews and colouring or playing with their cars they had just got for Christmas.  The service was finished by 10:30am.

Due to the fact that Cooking a turkey in the caravan (with no oven, and on an unpowered site) would be somewhat difficult, we had booked ourselves into a special christmas Buffet lunch at the Wirrina cove Resort, so we went to lunch from 12pm-3pm which was a very nice buffet with lots of tasty food - even a kids corner with fish, chicken and chips.  Santa even came, with presents for the kids. It was a great way to have Christmas lunch this year.


The rest of Christmas day was spent playing with the new toys and gifts, riding bikes in the caravan park, playing street cricket and lazing around the van, it was a nice way to end Christmas day for 2011.


On Boxing day, we went to see Cape Jervis - which has the ferry that takes people over to Kangaroo Island.  We drove down to Cape Jervis, stopping along the way at a few places to have a look.  One of the stops we made was the starfish hill Wind Farm.  We stopped at the bottom of a windmill to have a close look.  We have seen LOTS of wind farms on our travels so far, and so it was good to see a windmill up close and hear the blades whipping around.  We also stopped in at Rapid bay - where there was a very full campground, as well as a big jetty with lots of scuba divers.  At Cape Jervis we watched the car ferry leaving the terminal while we had lunch.  After stopping for a swim at Second Valley beach, the rest of the afternoon was spent playing around the caravan park.


For our last full day on the Fleurieu peninsula, we took another trip over to the other side of the Peninsula because we wanted to go to Goolwa - the closest town to the mouth of the Murray River.  We drove back through Victor Harbor and went to look at Port Elliot on the way through to Goolwa.  When we got to Goolwa, the Steam train (the oldest public transport railway in Australia) pulled into the station.  So Liz and the kids jumped on the steam train and had a ride back to Port Elliot while Mike drove the car back to pick them up.  We had heard that the fish and chips at Horseshoe Bay Port Elliot were great, so we stopped for a special lunch of fish and chips on the beach (and they were terrific). 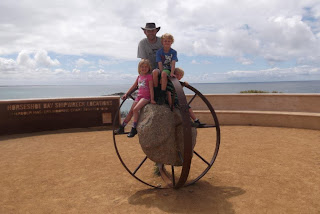 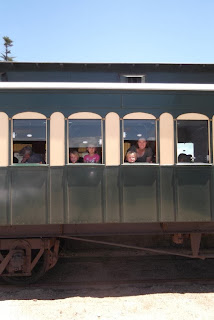 We certainly did pack a lot into our time staying on Fleurieu, but it didn't feel rushed and we had a great Christmas time together.
at Monday, January 02, 2012