As we drew closer to Adelaide, we came to Tailem Bend, which is right on the banks of the Murray River. Having spent so much time along the Murray near the start of our Journey, we wondered if some of the water flowing down the river was the same water we swam in all those weeks before! We stopped briefly to have a look at the Mighty Murray near it's mouth and take a quick snap before heading into Adelaide.


In some tourist information, we had seen some nice things about a place called Hahndorf, and so we thought we would go and have a look on our way through to Adelaide. Unfortunately this was a pretty bad move. Hahndorf would be beautiful, but it's main street was thin with cars parked on both sides, and absolutely nowhere for a caravan to pull in and park! so we drove down the main street and looked from our car windows (except Mike who was trying not to take out any parked cars mirrors!) and then drove out of town a little disappointed that we didn't get the chance to stop and have a proper look.

The closer we got to Adelaide, the more we noticed the pace of the cars pick up, and the frustration level of people also increase. It's amazing what a few weeks out of a big city can do - we thought we were a bit more relaxed, but we didn't realise that compared to the frenetic pace of life in a big city, we really have slowed down! The cars (and trucks) were much less tolerant of a big old van getting in their way, nonetheless we made it down the (very steep and long) Adelaide Hills to the city and found Andrew's house.

Andrew and Mike had gone to School at Barker together, and had been in touch over Facebook to organise a catchup if possible. Andrew had very kindly offered a driveway for us to shelter in for as long as we wanted (thanks Andrew, we really appreciate it) so we stopped in and had a good catchup for a few days in Adelaide. We had booked a campspot on the Fleurieu Peninsula for the time over Christmas (because we didn't want to be left in a manger on Christmas day!!) so we only had 2 nights in Adelaide the first time 'round. Andrew (or Mr Phillips to the kids) and his family live in a beautiful house just near the city, so it was nice and central. 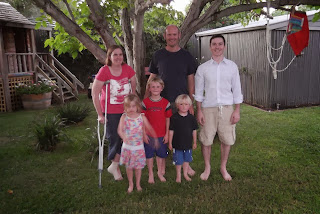 The day we got to Adelaide was really hot, as was the next day, so after getting some washing done, we headed for the beachside suburb of Glenelg for a dip. The water was nice and refreshing, and we all had a cool off in the water - even Liz with her crutches, and we were glad we did. The kids and Mike splashed for a long time and enjoyed the afternoon.

Mike had organised the Caravan Bearings to be inspected on Friday the 23rd December (the last trading day before Christmas) and so we were up early on the Friday to get the Van to the service centre to re-pack the bearings (having done 1000Km's since our breakdown) and all was in good order (to the relief of Mike and Liz). While the van was getting looked at, Andrew had made a phone call and managed to get Bruiser booked in to have an oil change, and so the morning was spent getting the car and van serviced while Liz and the kids had a quiet play at the house.

When the van and car were ready, we headed south toward Wirrina Cove where we would stay for 5 nights and enjoy Christmas together on the Fleurieu Peninsula.

Thanks for the updates. Coorong looked so lovely and to have the camp site to yourselves...beautiful! Wish we could have been there to share it with you!

Hey Ali,
We wish you and the family could have been there too - but of course it would have rained if our 2 families got together camping :) just like every other time. Hope you are well.
Mike