After leaving Wilsons Promontory, we drove to Warragul.  Due to the fact that we were still without our caravan, the NRMA Roadside Assistance organised another night of accommodation at the ‘Edinburg Motel’ in Warragul.  It was quite a nice change from the tent:  to have 2 rooms, a bathroom and a TV.  We checked in then went into town to look for a new camera - to replace the other one which broke a few days earlier.  After finding one, and having a play at the very nice Warragul Civic Park, we gave ourselves a treat and had dinner in town.  From about 7pm, it started raining quite heavily, and then it absolutely bucketed down throughout the night – we were very thankful we weren’t staying in a tent that night!


After a good night sleep, we all woke up refreshed.  Checkout was at 10am, so we packed up and headed for some of the sights at a town called Noojee, which is not far out of Warragul.  Our first stop was an historic trestle bridge which was used for the railway in the early 1900’s.  We walked up and along the bridge and it was very nice. 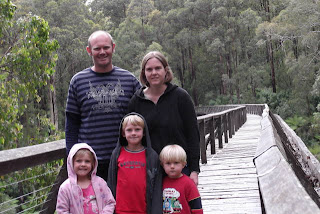 Bruiser (our landcruiser) has held up really well for us on the trip so far.  We’ve been really happy with him (even if Bruiser is a bit of a slug sometimes – being non-turbo) and the kids are also quite fond of Bruiser too J

After the trestle bridge, we had a brief stop at a waterwheel and the headed to the Toorongo Falls and Amphitheatre falls.  After all the rain we had the night before, the water falls were truly a spectacular sight.  We hiked up to both the falls and it was really awesome to see the huge volume of water flowing down.

After seeing the sights of Noojee, we headed to the caravan park that would be our home for the next 3 nights.  This was, again, organised by (and paid for) NRMA and we stayed in a cabin at the Glen Cromie Caravan park.  It had been closed the day we got there because it got flooded with all the rain the night before, but our cabin was nice and high and so we were able to stay there.  Unfortunately the water was not drinkable because they got it straight from the river, and the shower kept going cold, so the cabin was not fantastic, but it was much bigger than our tent, so we were very thankful to be in more ‘free’ accommodation – especially because it rained that night too.


Glen Cromie was equipped with 2 small playgrounds as well as a huge grass area to run around in, and the kids thought this was fantastic.  They loved playing on the playgrounds.  Dad had to set a rule about the see-saw because it caused too many tears if they played by themselves – you don’t often come across see-saws in playgrounds these days, and now I think I know why!  But nonetheless, all the kids loved playing around the camp grounds.


We didn’t do too much when we were staying at Glen Cromie.  We caught up on our school work, went for little bush walks in the park, tried to dry our tent, and played on the playground too.  The 3 nights went pretty quickly and it was soon time to think about what our next move would be.


We were still without the caravan at this point, and we decided that rather stay around Warragul, we would head for Lakes Entrance to have a look at that part of Victoria.  On the last day of November, we packed our car (in more pouring rain) and left Glen Cromie to head for Lakes Entrance – we didn’t think that we would be coming back to Glen Comie, But in the end we did, but more about that later…
at Saturday, December 10, 2011