After making our way to the end of the Great Ocean Road,  we headed into Warrnambool and set up camp at the Surf side Holiday park. A beautiful spot by the beach and a huge adventure play ground right across the road, which you don't even have to cross as there is a tunnel from the caravan park straight to the Adventure playground. We got the kids bikes out and headed to the playground, where we spent the rest of the afternoon, having fun exploring and playing. 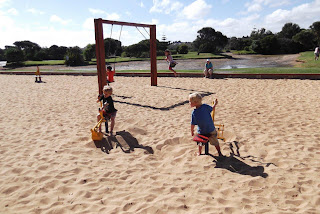 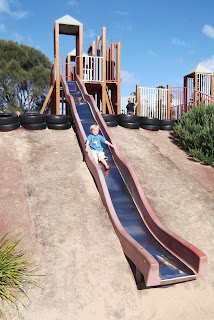 Next day we did some shopping and had a look around town.  We walked right along the breakwall and found a fur seal swimming in the water right at the end.

Our next day we headed out to Port Fairy,  on our way to Port Fairy we found Tower Hill State Game reserve.  Which is an old volcano,  we hiked to the top of Tower Hill which was very steep,  but a great view at the top.  Liz spotted a Red Belly Black Snake just next to the path on our way back down,  so now we have added that to our list of native wildlife we have seen in the wild.  We also saw emu's while we were in the reserve. 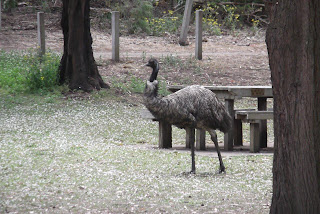 At Port Fairy we ate lunch in the car as we watched huge waves crashing on the beach and rocks,  and then we went to Griffith Island and did the walking track out to the lighthouse.  We spotted 5 swamp wallabies as we went.  After a play in the playground near the car park we hopped back in the car and headed to Hopkins Falls.  Which are about 20 mins out of Warrnambool.


There wasn't a lot of water on the falls, but they were still beautiful.  We decided to walk down to the bottom to see if we could see any Platypus in the River.  While walking down the steps to the bottom,  Liz rolled her ankle badly and was in a lot of pain.  So we headed back to Warrnambool,  straight to the hospital.  Thankfully,  their was no broken bones, but her ankle is badly sprained and she can't weight bear,  so now we are travelling with crutches as well! So the next day,  while Liz rested her ankle, Mike took the kids back to the adventure playground for a couple of hours of fun.


We ended up staying 4 nights in Warrnambool, just to give Liz's ankle the best start to healing that we could, and so the days were really just spent with Liz lying, sitting or resting to keep off her ankle, and Mike and the kids keeping entertained around the park.

After a few rest days for Liz, we decided that we'd just push on and so we left Warrnambool on Thursday the 15th December, bound for a free-camp spot at Dartmoor, our last stop in Victoria.  On the way to Dartmoor, we passed the Portland turnoff, and decided to make the 10km round-trip into Portland.  We were glad we did because after a look at the information centre, we had lunch and the kids had a good play at the foreshore playground - right opposite some huge piles of woodchip that gets exported from Portland.  We saw large semi-trailer's being tipped up on a lever - to make them into massive Dump trucks - it was quite fascinating!

We left Portland early in the afternoon and made the final hop to Dartmoor.  The camp spot at Dartmoor was quite a nice spot, right next to a river and with a big grassy area for the kids to run-around in.  There were about 4 other vans/campers in the campspot that night, but it wasn't too crowded at all.

We only stayed at Dartmoor for 1 night, and on the way out of town, we had a brief look at the fantastic tree carvings that line the streets of the town.  Some of them were so elaborate.  They were quite amazing.

I'm going for the cool button to be my like button Tim, especially seeing the pic of that massive semi being 'tipped'!

By the way Mike, I love the tracker and am looking forward to watching you progress in real time across Nullabor

I'm hoping you don't get to see any more hospitals! Just big things,wildlife and kid's parks.
Happy Christmas and lots of love.