We started our journey on the Great Ocean Road with a stop in at Bells beach to have a look.  It was a beautiful sunny day and the surf was as flat as a tac.
We wound our way along the Great Ocean Road to Lorne.  While in the visitor center in Torque,  Liz picked up a leaflet titled "Free Camp Spots along the Great Ocean Road",  which had a few camp spots in it that were not in our Camps 5 book - bonus!  We picked the camp spot called "Big Hill" Camping ground about 10km out of Lorne and deceided to camp there.  Since we had had an early start with the 8am car ferry we were in Lorne by lunch time.  So we set the Caravan up in a really nice bush free-camp and headed to town to see the sights.


Our first stop was Erskine Falls,  which were spectacular. We hiked down over 300 steps to get a really good view,  well worth it in the end. 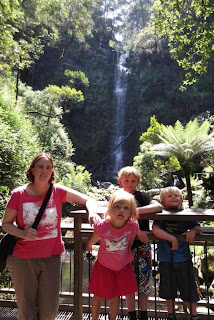 From here we headed to the beach for a swim.  After picking up some much needed supplies we headed back to our camp site to cook dinner, and the kids had a great time riding their bikes around the camp ground.  Our friendly neighbours that night were a couple from Switzerland who are travelling around the world in a year,  they had been to New Zealand first and now they had driven in their little campervan down from Cairns and were due to fly out to Vietnam in a few days time.  You meet some very interesting people on the road.
The next morning at breakfast we were joined by a pair of King Parrots who were very friendly.

From Lorne we headed to Apollo Bay, where we had lunch and a look at the town,  before heading on to the next free camp spot at Aire River. We got ourselves set up for a few nights and headed down to the river for a swim,  the water was cool but refreshing. We found a Koala and her baby in a tree just near our caravan.


Next morning we headed to Cape Otway,  where we found a colony of Koala's, in all the trees that lined the road and since the trees were not that tall they were all clearly visible, we saw at least 50 of them.  After spending some time looking at the Koala's we headed on down the road to the Cape Otway Lightstation,  but after deciding that it was too expensive for all of us to have a look at a lighthouse,  we headed to Point Franklin instead and found a beautiful beach (except for the flys), which had a view to the lighthouse.   We spent a bit of time exploring along the beach, before hiking back up to the car and heading to the Otway Fly.  At the Otway Fly we did a tree top rainforest walk, which was beautiful. We then headed back to our camp site.

The next morning we packed up and headed on our way.  Our first stop for the day was "Gibson Steps", where we enjoyed the beautiful view and walked down all the steps to the beach below.

Next stop " The Twelve Apostles",  and then" Loch Ard Gorge" it is such a beautiful coastline.

We pulled into the Port Campbell Holiday park that afternoon where it rained on and off all afternoon.  The kids had a ball riding their scooters through puddles and getting really wet. After dinner we enjoyed a walk along the river, trying to catch fish that had been caught when the tide went out, and then made our way up to the look out before returning to camp to head to bed.

The next morning we headed out of Port Campbell it wasn't far out of town where we stopped again to have a look at "The Arch",  then "London Bridge" and "The Grotto".

Lots of fun following you guys on your trip, Merry Christmas to all. I have a picture of Caroline standing on the London Bridge (whichever one collapsed) when she was heavily pregnant with Katie. It collapsed a few months later with about 4 people who got trapped on the other side and eventually were rescued by chopper.

Hi Liz,
How is the ankle. You are giving it a work out with all those steps. Amazing. Its looks fantastic. Let me know if you need some on the road physio advice
Merren