After spending almost 2 months (and about 6,000Km’s) in Victoria we were finally ready to cross the border into South Australia.  We didn’t really think that we would spend so much time in Vic, and zig-zag across the state, but we were really happy that we got the opportunity to do so much of Victoria because it is a lovely state – we enjoyed our time there immensely.


When we left Dartmoor, we still had a fridge full of fruit and Veg, and we had heard that the SA Border is quite strict on their quarantine rules, so we stopped not far from the SA/VIC Border, and  had a fruit picnic at a rest stop.  We all ate so much fruit and veg that day – definitely more than our daily quota!

Once all our fruit and veg was gone, we jumped back into the car and headed for SA.  The border crossing was a little bit of a disappointment – we almost missed it… a faded sign on the side of the road let us know that we were now in the state of South Australia, Nonetheless, we had changed states – and Timezones J


We headed straight for Mount Gambier – which isn’t that far across the border really.  We found a Caravan Park (Top Tourist) which was the cheapest, and booked in there.  This caravan park only had ensuite sites, which suited us just fine - especially with Liz's limited mobility with her sore leg, so we got our own ensuite while we stayed there for 3 nights.


When the van was all setup, we went for a drive around town to have a look at a couple of the sights and get our bearings a little.  The biggest feature of Mt Gambier is the Blue Lake, so we went there after a brief stop at the shops to have a look at it.  Liz’s Leg was still very sore and so she was a bit limited in getting to some lookouts, but we drove to a few lookouts and saw a magnificent blue lake.  It really is very spectacular, and each November it turns a brilliant blue, and then slowly fades to gray by March/April – no one really understands why, but it is definitely a great thing to go and see.
On Saturday 17th December, we went to have a look at the Umpherston Sinkhole which was pretty close to our caravan park.  The sinkhole is just a section of an old cave that has fallen in, but they have planted some really nice gardens in the sinkhole and done a fantastic job of making it a great tourist attraction.  Mike and the kids went down into the sinkhole, but the stairs were a bit too much for Liz (and her crutches), so she enjoyed the view from the top.  As we were just about to leave, it started raining, and then pouring, and then bucketing.  We all got soaked getting back to the car.

With the weather turning bad, we thought we’d have a look at the Lady Nelson Discovery Centre (the information centre) that has some indoor exhibits and interesting history.  We didn’t stay too long in the centre, and then headed for ‘Valley Lake’ which is next to Blue lake.  Valley Lake can be used for swimming and recreation activities (unlike Blue lake, which is the water supply of the town).  The weather wasn’t conducive for swimming, but Mike and the kids went on a Wildlife walk at a free wildlife park in near the lake, this (and another look at blue Lake) filled up the afternoon before we retired back to the van for the night.

Sunday the 18th was Samuel’s 4th Birthday, so this day was all about him J.  The weather hadn’t really improved and there were intermittent showers throughout the morning, but that didn’t dampen Sam’s enthusiasm to open his presents – of which there were many!  After some of the presents were open (and breakfast), we thought that we’d make the most of the wet weather and visit an indoor play centre as a special treat for Sam.  The kids had a fantastic time for more than 2 hours playing on the equipment and enjoying themselves.  Hunger finally got the best of the 3 kids, and we went back to the van for lunch and some after-lunch Birthday Cake for Sam. 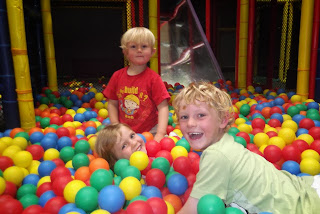 After Lunch, we jumped in the car and headed for Port MacDonnell south of Mount Gambier.  We had a good look around the area, as well as a quick drive on the beach.  Just outside of Port MacDonnell is South Australia’s most Southerly point, so Mike and the kids had a look there too.  It was a nice spot to visit.  To end off the day, we thought we would let Sam choose what he had for dinner – and he chose Hungry Jacks (having never had it in his life before!) but we went there and had a birthday dinner for Sam, and he loved it.  Sam thoroughly enjoyed his birthday, and is now a big 4 year-old.

Sam’s Birthday (the 18th) was the last full day we had in Mount Gambier before heading onward and upward (well Northward at least) to Robe.
at Wednesday, December 28, 2011