On Friday 6th Jan, we left Whyalla and headed for Cowell (as we didn't want to go straight from Whyalla to Port Lincoln in one hop).  We were on the road at about the normal time (10am checkout from Caravan Parks), but we wanted to make sure that we left early because each afternoon the winds started picking up and driving with a strong headwind makes for difficult (and expensive) towing.

We pulled in at the one Caravan Park in Cowell and checked in for one night.  We found out that the Wallaroo to Cowell ferry has not been operating for about a year (lucky we didn't want to come from the Yorke Peninsula to the Eyre Peninsula using the ferry to cross Spencer Gulf!).  Nonetheless, the caravan park was quite full but we got our spot for the night and setup.

We went to have a look for some Cowell Jade and a look around town as well as picking up a few supplies from the local IGA.  That afternoon we decided to go for a walk along the Jetties a short walk from the Caravan Park.  Cowell was a nice little stop for us, but one night was enough to see what we wanted to see.

Knowing that we had quite a long drive ahead of us (only about 160km's, but we'd been doing quite short trips for some time now) and also knowing that the winds would pickup throughout the day, we left Cowell quite early to drive to Port Lincoln.  After stopping briefly at the Information Centre (something we do almost every time we come across one), we went to the one caravan park in Port Lincoln.  It was a fantastic caravan park, with it's own Beach, Jetties and Playground as well as quite good facilities - we were quite impressed with it, and ended up staying 3 nights instead of 2 that we were going to stay.

Because there was a good Jetty at the park, we went into town and bought some tackle to go fishing.  The kids loved fishing with mum and dad (Josh can cast really well, although it is a bit nerve racking trying to control the hooks of 3 kids on a sometimes crowded jetty) but we managed well and Dad was the only one who got hooked by a squid jig (his own silly fault).  We were fishing for Squid when we were at the jetty because there were lots of squid around the area, however, we didn't catch any that day.  That night, after the kids had gone to bed, Mike went for another fish, and caught a squid, which we subsequently cleaned and ate - it was very nice (but the kids didn't like it too much).


On Sunday we went for a drive out to the Lincoln National Park to see what was there.  We drove right out to Cape Donnington Lighthouse.  When we were on the Cape, we saw 2 sealions swim right up to some fishermen who were on the point.  The sealions came in very close to the shore and had a look at us before heading on their way.  We enjoyed driving around the national park and having a look.  That night, Mike caught 2 more squid, but we let those ones go because we weren't going to eat them. 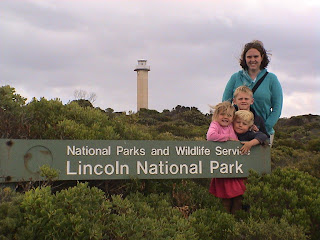 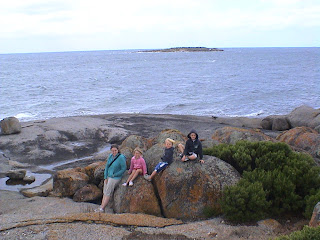 On our last day in Port Lincoln, we stayed closer to the town.  We walked along the main street and had a look at the shops, then walked out on the 'Town Jetty'.  Close to lunchtime, we drove up to Winter Hill lookout - which gives a fantastic 360 degree view of Port Lincoln and surrounds.  We had a good (and windy) look, and ate our lunch in the car at the top of the hill. 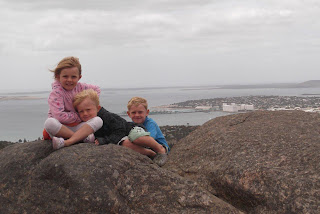 Some of the other things we looked at that day was the old Mill, as well as some old fishing boats near the maritime museum.  We then had a play at Puckridge Park and went back to the town foreshore for a play at the foreshore park (along with some ice creams for an afternoon tea treat).  We then went back to the Caravan Park, where the kids played at the playground (Playgrounds are quite a big part of our trip, and every time we drive past some play equipment at least one of the kids (usually Josh) will say, "can we play at that park".) 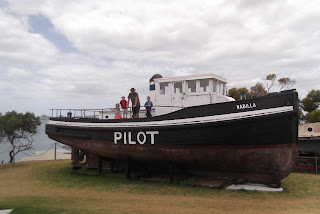 Hey Liz, Alice here, Harry from school's mum :-) Have just seen your blog and LOVE it! You guys are having such an amazing adventure, such a fantastic experience for your kids, look forward to reading more :-)