We decided that we would not have new years eve in Adelaide, but we would try to be in Port Pirie for New Years Eve (not because they have any big event that we knew of, but just as a line in the sand), so we left Adelaide on the 30th December.  We didn't want to drive straight to Port Pirie, so we thought we'd probably stop at Port Wakefield.

We arrived in Port Wakefield and had lunch.  Over lunch we decided that we would stay there for the night, so we went to the Caravan Park and booked a spot overnight.  We were very glad that we made this decision because the spot that we got was right next to a tidal lagoon and because it was starting to heat up (maybe 34 degrees) we went swimming in the lagoon quite a lot that day.

The evening was beautiful, and Liz and Mike sat outside overlooking the water as the sun went down.  It was really very nice indeed (for a place we weren't sure we'd stop at).


We woke up on New Years Eve, and drove to Port Pirie.  The day was beginning to warm up.  We'd been watching the weather, so we knew it would be above 40 degrees.  We arrived at the caravan park just before lunch and headed straight for the indoor pool that they had.  The pool wasn't anything fancy, but it was somewhere to have a swim.

After lunch we went to Kmart and Coles to find some relief from the heat and top up on some essentials for the next few days when shops would be shut over the new year's break.  We also stopped at the information centre to find out what happens on New Years eve in Port Pirie, and there was a 'Party in the Park' from 7pm, with family fireworks at 9:30pm.  So we decided that at night we'd head out to that for our new years event.

After shopping at Coles and Kmart, we got back to the Caravan, and it was 45 degrees outside (and 42 degrees inside the van).  The day was so hot, that our air conditioner overheated and would no longer cool - bummer!

We decided that the only real option was to swim, so we went down to the river and swam at the jetty on the river for a while as we waited for 7pm to draw nearer.  The river was nice and refreshing (much nicer than the caravan Park pool, because the caravan park had forgotten to turn the solar heating off on the pool, and it was probably about 32 degrees in the water :(

We finished our swims, and had some dinner (it was much too hot to cook, so we had a special new years eve treat at McDonalds) before we headed out to the 'Party in the Park'.

When we got to the park, there were free horse rides, free kids entertainment, and some lolly bags for the kids too, as well as face painting - all of which the kids enjoyed immensely while we waited for the sun to go down and the fireworks to start. 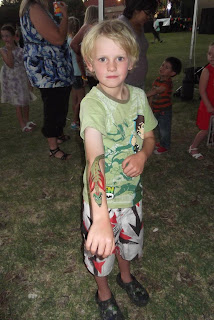 The fireworks display was at 9:30pm, and was a modest display of fireworks.  Everyone enjoyed it before heading back to the caravan to light sparklers and say goodbye to 2011.


Thankfully, by the time we got back to the caravan (which was still 37 degrees) the air conditioner decided to work, so we blasted the air cond and the fans in order to get some sleep that night, however it didn't cool down below 27 in the van that night.

We woke up to an absolute scorcher of a day as the first day for 2012.

With such a hot day in store (and all major shops shut) we thought we'd find some relief from the heat in the car, so we drove to Port Broughton and had a look around the town (and Fishermens Bay).

We will always remember Port Pirie as 'Hot', but it really is a nice spot, and we enjoyed the community feel of the new years eve celebration.
at Saturday, January 07, 2012