We left Albany on the 14th of Feb and drove a few km's down the coast to Cosy Corner East.  Unfortunately all the 'good sites' were taken, so we camped up on top of the hill.  This didn't really worry us because we were only going to be there for one night.  Once we'd setup, we went for a little explore on the beach and around the campsite.  There was quite a bit of swell around so we walked to the end of the beach and went for a swim just behind an island where it was protected from the waves.

On Wednesday morning, after a bit of school, we drove to Parry's Beach.  Everyone that we had spoken to in the Albany Area talked highly about this campsite and so we thought we'd give it a go.  We also knew that some friends we have made along the way (Kev & Sonia as well as Dean and Cath) would be at Parry's Beach around the time we would be there.  There were heaps of things we wanted to do around this area, and so we based ourselves at Parry's Beach for 3 nights.  We managed to get a site right next to Kev and Sonia.  The campsites here are fantastic, with tall shady trees to camp under which are out of the wind from the beach.  All the good reviews we had received about this site were spot on, and for $10 a night, what a bargain!!


When we'd setup our campsite at Parry's Beach, we had a chat with Kev and Sonia and they told us about a place called Greens Pool and also Elephant Cove (in the William Bay National Park) which sounded fantastic, so we packed all our swimming and snorkeling gear and went to find out what was there.

Greens Pool is such a fantastic place to go for a swim and snorkel, it is a large ocean pool that is protected by granite rocks which allows the water to flow, but stops any swell coming into the 'pool'.  Josh and Natalie both had a snorkel for the first time here and we saw lots of fish (including an angel fish) as well as an octopus - it was such a nice place to swim and snorkel.


﻿ After we'd spent at least and hour and 1/2 at Greens Pool, we went around to Elephant cove.  This was another fantastic place to swim and snorkel, with huge granite boulders towering out of the water like herds of Elephants around you as you swim.  The water was so clear and warm enough for us to enjoy splashing around without getting cold too quickly.

Everyone enjoyed our time swimming and snorkeling around this area so much that after schoolwork was done the next day (Thursday) we packed a picnic lunch and headed back to greens pool for lunch and a swim.  It was a much sunnier day that day and it was just beautiful to be swimming and digging holes on the beach.

At Parry's Beach (and a lot of the 'cheap' camping spots around WA) the showers are all solar heated and the hot water (or sometimes luke warm water - on a cloudy day) normally runs out if you get to the showers too late in the afternoon.  We all wanted a nice warm shower after our swim at Greens Pool, so we went back to Parry's beach and had a mid-afternoon shower (which was nice and hot) and spent the rest of the afternoon around the campsite and having dinner.

On Friday morning, we wanted to spend the day looking around the area, so we drove toward the Valley of the Giants (where there are huge Red Tingle Trees - some are hundreds of years old).  We were going to spend our money on a Tree-Top walk, but we'd done a tree-top walk at the Otway Fly along the great ocean road in Victoria, so we decided to visit Dinosaur World instead.  We had a good look around the Dinosaur skeletons as well as the reptile enclosures that were on display, then we went outside to have a look at all the birds that are in the park.  Natalie and Mike got to have a parrot perch on their shoulders (and heads) before we walked around the park looking at all the parrots on display.  We also got to feed the Kangaroos they have at the back of the park, which was a real hit with the kids.

We finished at Dinosaur world with a look at the gift shop and all 3 kids bought a soft-toy in the shape of a snake with their pocket money - something which Josh had wanted since Adelaide Zoo.


It was only a short drive to the Valley of the Giants.  We had a look at the interpretive centre and then went for a walk through the Ancient Empire - which is a free boardwalk that takes you past, through and around some spectacular Red Tingle Trees. 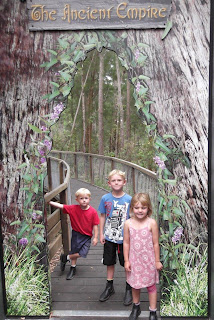 It was well and truly lunchtime by now, so we ate a picnic lunch amidst the giant trees before going for a drive to find another giant Tingle Tree and heading out to 'Circular Pool'.  The Giant Tingle was very impressive, and we pretended it was the Faraway tree (a favourite audio book we listen to in the car quite often).  There wasn't much water flowing through Circular Pool but it was nice to have a look at until the March Flies descended heavily! so we retreated to the car.


On our way back to Parry's beach, we stopped in at Conspicuous Cliffs (another tip from Kev and Sonia!) and marveled at the spectacular view we were presented with from the whale watching lookout.  It was very windy, but still quite hot, but well worth the hike to have a look at some spectacular coastline.


When we got back to camp, Dean and Cath had arrived with their 3 girls, so after dinner we had a chat while the kids played together.

We pulled out of Parry's Beach just after midday on Saturday 18th Feb (and managed to give our spot to Cath and Dean who had to park in the overflow parking for a night because all the campspots were taken) and headed for the Shannon National Park for a one night stopover.

As soon as we pulled into Shannon's and got out of the car the March Flies started attacking relentlessly!  There were hundreds of them and it made things very uncomfortable.  Josh spent some time in the car playing his Nintendo DS to escape the onslaught of flies, and then we put a video on for the kids to watch inside (away from the flies) while we went and had a good chat with Kev and Sonia who had been at Shannon's for one night already and were also staying that night too.  Once the sun was setting (and most flies had gone to bed) we had a brief walk around the site before heading to bed.

Needless to say, dinner and breakfast were both eaten inside the van (as opposed to our usual outside dining experience) because of the flies.  We didn't see much point in staying around too long, so we packed up pretty early and left Shannons to go to Pemberton.
at Thursday, March 01, 2012