After our play in the park in Donnybrook we headed into Bunbury and checked into the caravan park, it was still very hot so we headed to the pool for a swim before heading out to stock up on supplies at the supermarket.


Wednesday 23rd Feb we spent the morning getting our school work done and having a swim, then in the afternoon we headed out to explore Bunbury.  After stopping in at the visitor centre we headed to the lookout to get a bird’s eye view of Bunbury and get our bearings.
That evening we had a game of mini golf at the caravan park, Josh and Natalie were really into the game (as they had never played before) and there was some strong competition happening (especially from Little Miss competitive), Natalie even got a hole in one!

Thursday morning we did our school work as we eagerly awaited the arrival of Nanna and Pa (Liz’s Parents) who were joining us here in Bunbury with a motorhome that they hired in Perth.


Nanna and Pa had a few troubles with the motor home they had hired and had had to return to Perth to be changed to a different motor home and therefore didn’t arrive till early evening, so we spent the afternoon playing and swimming.


When Nanna and Pa arrived we spent time catching up over dinner and the kids had heaps of fun as they crawled all over the motor home to check it out.
Friday we spent the morning hanging out at the caravan and motor home and then we headed into Bunbury ,  first stop was the lookout and then we headed down to the beach for a swim and a late picnic lunch, on our way back to the caravan park we stopped in at “Big Swamp”  and walked out onto the boardwalk to see all the waterbirds.


Saturday we packed up and headed south in convoy with Nanna and Pa, our first stop was the Bussellton visitors centre and from here we headed down to the Jetty. We walked along the beach front to the jetty thinking that we might catch the little train that runs along the Jetty, but unfortunately it was booked out until 3pm that afternoon so we wandered back towards the car and had a picnic lunch by the water.  Much later in our travels, we received a tip from a Bussellton local that you just need to go to the Jetty before 9am or after 5pm and you can walk out onto it free!  However, we couldn't wait that long anyway, so we just moved on.


From Busselton we continued on to Dunsbourgh and checked into a caravan park and then headed to Cape Naturaliste to have a look at the lighthouse. After visiting the lighthouse we stopped in at Bunker Bay and had a look a the beautiful beach there before continuing on back to Dunsbourgh where we found a nice park to play in and another beautiful beach so the kids striped off to their undies and went for a swim.


That night, the kids had a much anticipated sleepover in the Motorhome with Nanna and Pa.  Josh and Natalie slept up the top above the cabin, and Sam had his own bed down the bottom (where the table folds down to a bed)


From Dunsbourgh we headed toward Margaret River stopping along the way at Ngili Cave, were we joined a cave tour.  The first 15mins were guided and then you were free to explore the cave on your own, the guide said it would take about 45mins but we ended up spending 1 and a half hours in the cave.  It was an amazing cave, very beautiful.  There were lots of steps and it went very deep (37m). We all thoroughly enjoyed the cave, including the kids.  One small section of the cave was set up so you could experience what it would be like to do “real caving”,  it was called “The Tunnel of Terror”. It was a long dark tunnel and you had to crawl on your hands and knees,  the kids loved it and ended up going through it about 4 times. 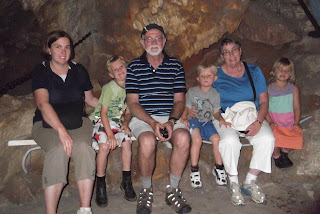 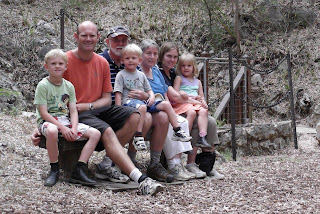 After this we headed into Margaret River.
at Monday, March 26, 2012