We left Kings Canyon and headed toward Uluru on Monday the 30th July.  When we were about 150Km away, we thought we could see the rock, but it turned out to be Mt Connor – another large rock on the horizon.  We got our first glimpse of "the rock" when we were about 50Km away.  We all thought ‘Wow, that’s a big Rock’.  We were all very excited about being near Uluru because this was one of the things that we all really wanted to see on our trip (especially Josh, who has been looking forward to being at Uluru since before we left Sydney 10 months ago).  We arrived at Yulara and checked in at the Ayers Rock resort campground and headed up to the lookout to have our first real look at Uluru, we then headed out to the information centre and had a look around the resort.

Tuesday 31st July - We had yet another slow start before doing our school work.  We then headed out to see Uluru.  We first stopped at the sunset viewing area to take a few photos.  When we were driving closer toward the rock (to go and visit the cultural centre) we spotted our first wild camel!


When we got to the cultural centre,  we had a look at some of the exhibits, and then in the art gallery the kids each bought themselves a wooden lizard as a souvenir.
After the cultural centre we headed to the rock.  We watched some people head off climbing it, it is incredibly steep to climb.  Mike took the kids a few metres up the rock to have a look.

We then did a short walk into a small gorge on the side of the rock, before driving round to the other side to do another short walk.

Uluru is an amazing place to visit so unique.  By this time it was starting to get late so we headed back to the sunset viewing area to watch the rock change colours as the sun set. 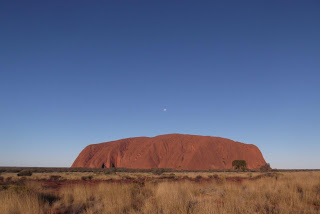 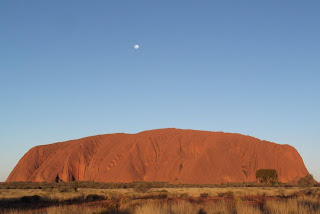 Wednesday 1st August. After a bacon and egg breakfast we did school in the morning and drove out to the Olgas (Kata Tutja) after lunch.  We drove to the valley of the winds and did the walk up to the first look out. Even though it was a cool day it was a hot walk through the red domes. After the walk through the valley of the winds we drove around to Walpa gorge and walked up between huge towering domes.  On the walk, we spotted our second wild camel near the base of the Olgas.  We walked to the end of the Walpa Gorge walk and had time a bit of time on the platform before busloads of other people arrived.

As we were walking back to the car we unexpectedly ran into Mike’s Aunty, Elizabeth. Aunty Elizabeth and Uncle Ian live in New Zealand, but were in Uluru for one day so it was quite amazing that we ran into them.  Mike organised to meet up with them later that night and so they hopped back onto their tour bus after a brief chat.  After leaving the Olgas we had a quick look at the sunrise viewing platform on the drive back to the caravan. Later that evening, after dinner, Mike went over to Ian and Elizabeth's unit for a cup of tea and a chat.


Thursday 2nd August – We tried to get going early on Thursday because we wanted to walk around Uluru (which is a 10.6Km walk) and we thought the kids would be freshest early!  We got to Uluru at about 10am and Mike decided he would do the climb to the top whilst Liz and the kids started the walk around the base.  It took Mike about 1 ½ hours to climb up and back (and it was a very steep and arduous climb!).
By the time Mike was down again, Liz and the kids were almost at the ½ way point around the base walk.  Mike drove around and picked up Natalie and Sam (who had walked really well, but were ready to stop).  Liz and Josh continued their walk and completed the full 10.6Km walk in about 3 hours.  The walk around the base was quite awesome – being next to such a unique formation in the centre of Australia.  After the walk and climb, everyone was a bit exhausted, so we went back to the caravan for a late lunch.
The afternoon was spent at the caravan (with a short trip to the supermarket) getting ready for our trip out to Warakurna the next day.  In order to drive to Warakurna you need an entry permit to travel through the Aboriginal land.  The entry permit was finally granted and so it meant we could head out to visit Kath and Steve (Liz’s Sister and her husband) who live in Warakurna.  We were all really looking forward to driving back into WA and seeing the Taylor’s house and spending a few days with them and their five kids.
at Wednesday, August 15, 2012