Thursday 26th July we headed out of Alice Springs and into the West Macdonnell ranges.  The scenery as you drive along is spectacular.  Our first stop was the Ellery Creek big hole, which is a large swimming hole.

It was very beautiful, but the water felt like ice and the day was cool so there was no suggestion of swimming.  Next stop were the Ochre Pits,  we had fun having a good look at the Ochre pit and then we had some lunch.


From there we continued on to Ormiston Gorge and set up for the night at the camping ground.  While we were setting up the caravan the kids spotted a Dingo scavenging around the camp kitchen.
That afternoon we headed out to explore the Gorge a little,  it is such a beautiful place and it was so still and quiet when we were there (once we got the kids to stay quiet for a few minutes!).  We spotted two more Dingo’s as we walked around the start of the Gorge.  As the sun was disappearing the temperature was dropping and we knew we were in for a cold night, so we headed back to the van for dinner and bed.

The next morning it was freezing in the van again and with no power we couldn’t use our heater so it was jackets and beanie’s on for breakfast.  We had another lazy morning and then did some school.  After lunch we jumped in the car and drove to Redbank gorge.  We did the walk right into the gorge, a fairly easy walk (but quite rocky).  It was very spectacular.  At the end of the gorge the kids (and Mike) spent quite a bit of time climbing on the rocks - they all had great fun.

On our way back to the campsite we stopped in at a lookout near Glen Helen, and then went into Glen Helen to fill up with Diesel.

We were going to do the short walk into the Glen Helen Gorge but the kids didn’t want to know about another gorge walk so we continued on back to camp.  When back at camp we did manage to get the kids to agree to walking to the lookout at Ormiston Gorge and they all enjoyed the walk and it was a beautiful view.


We woke to another cold but beautiful morning on Saturday 28th July.  We were pretty keen to get going early because we didn’t know how long it would take us to drive the  Mereenie Loop (which is about 150Km of dirt road that joins the West Macdonnell Range National park to Kings Canyon).  We were unsure of the condition of the road and were a little nervous taking the van on more unknown dirt road (because last time we did that we lost our water tank!).  Nonetheless, we wanted to do the Red Centre Way, so we had breakfast, hooked up the van to the car and left the Ormiston Gorge campground at 9:30am.  As we drove out of the West Macdonnell Ranges, we stopped at Taylor's pass lookout, which was beautiful.  When we hit the dirt road, we stopped and let down the tyres on the car and the caravan.  We locked our hubs, engaged 4WD (which we always do on long stretches of dirt) and hit the road.  The road reminded us of the Gibb River Road.
Overall, it was in good condition, with small patches of bad corrugations and small patches of tyre-shredding rocks.  We only passed about 10 vehicles going the other way - one of them was stopped to change a tyre that had been a casualty of the road.  The countryside was quite beautiful along the way and we were in no hurry.  We made our top speed about 60 or 70Kmph.  Unfortunately, along the way we lost our 4th UHF Aerial!!! Our Bullbar seems to rattle more that most and the UHF aerials just sheer off at the base!  Anyway, after about 3 hours we came out the other end of the dirt road with all tyres still in one piece and we arrived at the Kings Canyon Resort where we checked into a powered site for 2 nights.  That afternoon the kids had a good play at the playground and we had a brief walk around the resort.  It was Liz and Mike’s Wedding anniversary, so we decided to go out for dinner as a special treat (and there just happened to be a restaurant at the resort!).

Sunday 29th July – we headed out to Kings Canyon which is about 16kms from the resort.  We decided to do the 6.5km Canyon rim walk. The first part of the walk was very steep but once you reached the top of the Gorge it was fairly easy going.

It was a fantastic walk,  the scenery was spectacular.  At one point we lay on our tummies and looked over the edge of the cliff, which was amazing.  The kids all walked really well,  by the end of the walk (which took us about 3 hours) our legs were getting tired but it was a great walk and we all had fun. 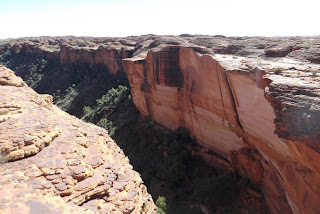 We then headed back to the van for a late lunch and a play at the playground.  We were pretty tired and so we just hung around the van that afternoon until dinner and bed.

The next morning we packed up the van and headed to Uluru.
at Wednesday, August 08, 2012