On Thursday 18th October we caught the 10:00am Barge to Fraser Island. We had a very smooth ride to Fraser as there was not a breath of wind.

When we arrived at Fraser we drove from the barge to Central Station campground, we found a campsite and setup camp.  After we were all setup, we went to Central Station (which was an old logging village for the Forestry industry) and had a look around and a walk in the rainforest by a Crystal clear creek, it was so clear that at first it didn’t look there was any water at all!


That afternoon we went to Lake McKenzie for a swim.  Lake McKenzie was absolutely beautiful and we had the whole place to ourselves which was nice.

The next day we drove along the inland track to Lake Wabby.  It was quite a rough and bumpy track but we didn’t have any problems driving along the sandy road.  When we arrived we walked out to the lookout of Lake Wabby to admire Fraser Island's Deepest lake (at 12m) from above.

After a stopover in Eurong, we kept going south along the beach to Dili Village (Dili Village is an area with some University accommodation) and then inland to a few lakes.  The closest we came to becoming bogged on Fraser Island was trying to get off the beach onto the inland track at Dili Village, but we just managed to get onto some hard sand and not get bogged, which we were very glad about.  We swam at Lake Birrabeen and, because it was quite late in the afternoon, we had Lake Birrabeen all to ourselves too, and it was beautiful.


On Saturday the 20th we were up and going quite early to beat the tides so that we could head to Eli Creek for the day. All the maps of the island said that Eli Creek was not passable at high tide. When we got there the tide was already too high, but we discovered there is a track high up on the beach (which was very soft sand) that led to a crossing further up the creek.  So we crossed the creek and set ourselves up and spent the next 4 hours having an absolute ball at Eli Creek.

Eli Creek is another crystal clear creek.  It is spring fed and it flows steadily.  There is a boardwalk that takes you up-stream a bit then you jump in the water and float back down. The kids loved floating down the creek on the inflatable boogie board which we bought when we hit the East coast.  We swam, had lunch, swam some more and watched all the other people (mostly English Backpackers on Tag-a-long tours) who were at Eli Creek that day. We did some Whale Watching while we were there and saw a humpback flapping its side fin against the water.


After Eli Creek we headed up to the Maheno Shipwreck and had a look at this 70 year old shipwreck.

Then we drove back to Central Station via Eurong to spend the night back in our tent.

While driving on Fraser Island, it is very important to ‘drive by the tides’ because they say that you should not be on the beach for 2 hours either side of high tide and some spots on the beach are only passable 2 hours either side of low tide.  The week we were there, it was generally high tide during the day (which wasn’t optimal, but it didn’t stop us doing anything we wanted to do).  On Sunday 21st the first low tide was at 5:30am, and we needed to get from our Central Station Campsite to the Dundubara campsite, (which meant crossing Eli Creek and even though you can pass further up the creek we were not so keen to do the super soft sand fully loaded as we had a lot of gear on our roof)  so we got up very early and were leaving our Central Station Campsite before 7am ( which is just amazing for us - we have never left so early with the caravan, and on Sunday morning we had to pack up the whole tent!).  Anyway we had to leave so early because we wanted to drive along the beach before the high tide made it difficult.  As we drove along the inland track toward Eastern Beach, we came across two 4WD’s (both with camper trailers) who were stopped in the middle of the track.  The first car was well and truly bogged in the soft sand and the second car couldn’t (or wouldn’t) reverse to tow them out.  After a quick assessment of the situation, we realised that we’d have to try and pull them out, so we got in front of them, hooked up a snatch strap and after a few jerky attempts to get them free (and almost getting ourselves bogged in the soft sand), we managed to pull their car and connected camper-trailer out of the sand! (well done Bruiser!).

They were very grateful as they’d never driven on sand before.  They were heading our way, so we drove in Convoy up to Cathedrals Beach where they stopped and we kept going to our Campsite at Dundubara. Driving along the beach at low tide was like driving on a highway, so much easier than the soft stuff.  We setup the campsite and had a very quiet day around the tent.  The kids watched a video, and we just sat and relaxed a bit.  That afternoon, we drove to The Pinnacles, which are 700,000 year old sand ‘cliffs’. 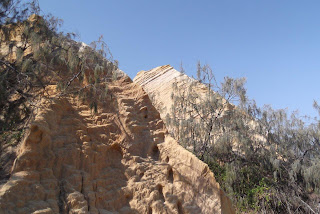 The next morning, Monday 22nd, we wanted to make the most of our day up the North of the Island, so we headed to Indian Head. Along the way we stopped at Red Canyon (which are red sandstone cliffs) and then kept driving.

We parked the car and walked up to the top of Indian head.  We could see Dolphins, Whales and Manta ray’s out in the ocean before us, the view from the top was amazing.


We decided to drive a little further North to Champagne Pools – some protected rock pools.  The track was quite sandy and other people had got bogged trying to get off the beach, but we managed to make it through.  We swam at Champagne Pools, played tip and enjoyed the salty water.

We headed back down south and stopped on the beach near Dundubara campground.  The kids had a splash in the waves which they really enjoyed.
For the entire duration of our stay on Fraser to that point, the sea was very calm - as it had been blowing a gentle offshore breeze for a day or two.  Late That afternoon, we drove a bit south to do some Whale spotting.  There were a few whales doing full breeches out of the water, but they were a long way offshore.  Everyone was very tired after a very early morning, so it was an early night for all.
Tuesday 23rd was our last day on Fraser Island.  A Southerly change had blown in on Monday night, and the weather changed dramatically.  We were going to stop at Eli Creek on our way South, but it was a bit cold and the South Easterly Wind was pushing the water (at FULL low tide) very high onto the beach, which meant that some sections of the beach would definitely be impassable at High Tide, so we decided to push on to Eurong.  It was not the smooth highway drive like we had had on the way up the beach a few days before.  We did drive through Happy Valley to have a quick look as well.

After a quick stop at Eurong, where we treated ourselves to coffees and hot chocolates, we drove out to Lake McKenzie to have a swim.  The sun was shining, but the wind was still blowing a gale, however that didn’t stop the kids having a swim – but they got cold quite quickly.

Then it was lunch in the picnic area and then we drove back to the Barge in time for the 3pm Ferry back to the mainland and back to our caravan in Hervey Bay.


As we spent the next day unpacking the car, doing some shopping, washing all the salt and sand off ‘Bruiser the Cruiser’, cleaning up the caravan, and doing some schoolwork; we thought about what a great time we had just had over on the Island.  It really is a fantastic place and we will remember our camping trip to Fraser with much fondness.  We would definitely rate our Fraser trip as a highlight of our Big Aussie Road Trip.
at Wednesday, November 21, 2012