Thursday 25th  We packed up and headed for the Sunshine Coast.  We were heading to the Maleny Showgrounds to camp. Maleny is in the hinterland of the Sunshine coast.  We put the address into Navman and headed off, but we failed to look at what route Navman was taking us on and before we knew it we were heading up a hill that suddenly got very, very steep and it just went on and on,  there was nowhere to pull over or turn back,  our car is not a Turbo diesel so we are slow on any hill but this one was scary, we discovered its name was Razor back and Mike had to put Bruiser in First gear and for a few tense moments there we thought we were going to have to stop and put it in low range 4wd to keep going (we had a line of cars behind us as well).  We finally made it to the top and decided that we would always check which way Navman was taking us, as it would have been a lot less stressful to cruise down the highway a bit longer and take a much better road up the hill.  After the stress of the steep drive, we stopped at a lookout.  The view from the top was absolutely amazing.  When we arrived at Maleny we set up at the showground (which are the nicest showgrounds we have stayed in).  It was only a short walk into town, the town skate park was in the showgrounds and the kids had a huge oval to run around on and there was plenty of room to ride bikes.  So that afternoon we walked into town and we spent a little bit of time at the skate park.  Our neighbours at the campground had a very little dog called Darcy, and our kids loved her, they spent every spare minute playing with her.

On Friday 26th We went to Australia Zoo, the kids were very excited as they have grown up watching the Crocodile Hunter and Bindi the Jungle Girl.
We arrived as the zoo opened and we didn’t leave until it closed, it is such an amazing place.  There are so many hands on experiences and lots of shows to go to, we loved the croc show at the crocoseum,  the Tiger show was just amazing and it was amazing to feed the elephants.  We also visited the Animal hospital which was very interesting. 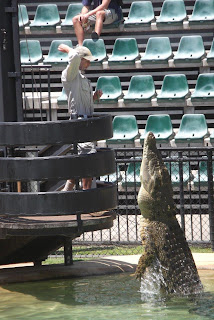 We had so much fun that the next day we got up and headed to the zoo again (as we had bought a two day pass) and we had another long day having a fantastic time.  The kids were also very excited when we spotted Robert Irwin while we were watching the crocodiles being fed. 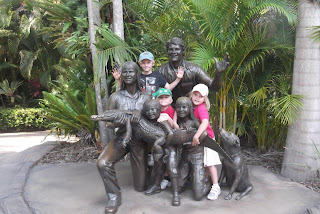 On Sunday the kids spent quite a bit of time playing with Darcy the dog, while we packed up.  We then drove down the hill and across to Maroochydore where we set up for another 4 nights. That afternoon we went for a drive and then went swimming back at the van park.

After being healthy for the past 12 months Liz and the kids came down with colds, but that didn’t slow us down too much.

The next day it was time to do a bit of school and a bit of shopping and a bit of scootering at the park next to the caravan park.  Our car windscreen had a crack in it which was growing rapidly so that afternoon we had a new windscreen installed.

On Tuesday after a bit of school in the morning we headed up to Noosa Heads, we had a picnic lunch and a walk in the national park.

The next morning we headed to the markets at Emundi, we didn’t realise how popular these markets are! It was huge and crowded but they were great.  Lots of interesting stalls to look through. After the markets we stopped in for a photo and a climb to the top of the Big Pineapple. That afternoon, the kids rode their bikes around the large park next to the caravan park again and then played on the play equipment.