Although the drive from Strahan to Hobart is only about 320Km, it is quite a long drive due to the terrain that you must cross to get from the West Coast to Hobart.  In fact, if you flattened Tasmania out, it would cover more area than Mainland Australia, so you can tell there are lots of hills on the island!  Throughout our travels for the last year and a bit, everyone has travelled really well.  Natalie would occasionally complain of a sore tummy on winding roads, but overall everyone travels well.  Unfortunately, since hitting Tasmania, Natalie has had a lot of motion sickness (Kwells help a bit though, which is good).  We drove from Strahan to Queenstown and then on to Lake St Clair where we stopped for lunch and a look at Australia's deepest freshwater lake. 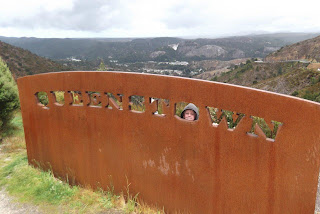 We were then heading for Hobart, where we had been given a 4-night stay at a luxurious resort as a gift!  Not only had we been given the resort stay as a gift, but it was a Presidential suite at the resort!!!  So we went from being in a wet tent on air mattresses, to being in a 3 Bedroom villa with a King size bed, a fireplace, 3 TV’s, a Wii, a DVD player, 3 baths (2 Spa Baths) and as much space as our house in Sydney!

It was soooo luxurious, and we were just blown away with how nice it was.  We were sure that the next 4 nights would be superb.  When we got to the villa, we unpacked all our gear and explored all the amazing things that we had at our disposal for the duration of our stay.

On Mon 17th  we played some Wii after breakfast, then we drove to some nearby shops to re-stock and buy some presents for Sam’s birthday, which was the next day (and also buy some Christmas Presents while we were in Hobart).  After the shops, we had lunch at a park where the kids had a bit of a play, and then we headed to the Cadbury Factory at Claremont.  We were expecting to pay the normal entry fee, but they were having a fundraising that day and we only needed to make a gold coin donation to enter which was a bonus.  Also, we were pleasantly surprised to each be given 2 big blocks of chocolate after we’d made our gold coin donation!  We listened to the 2pm Presentation about how chocolate is made and packaged and then spent a little bit of time browsing through the Cadbury Shop - which has lots of chocolate at very cheap prices!  I wish I could say that we resisted the temptation to purchase a few things!
After the Cadbury factory, we drove through the Hobart CBD and made our way to Mount Wellington.  When we got to the top of the 1100m Mountain, we got out of the car and it was freezing with a cold wind blowing.  We had an explore around the mountain for a bit and went to the viewing shelter and platforms before succumbing to the cold and heading back to a nice warm car.  It is a fantastic view from Mt Wellington, and we loved heading up there that afternoon.

Tuesday the 18th of December was Samuel’s 5th Birthday.  Needless to say that all the kids were excited about getting up that morning!  Presents were the first thing to happen and Sam ripped through his pile of presents in no time - and was thrilled with each thing he got.  Sam wanted Pancakes for breakfast - so pancakes it was!  After breakfast (and playing with some of the birthday presents for a while), we went and got some bikes to ride around the resort, and to ride along the road parallel to Seven Mile beach.

We rode for a while and explored around the resort (including finding the playground) and then we rode to seven mile beach for a look.  When we’d had enough riding, it was time to think about getting a ‘Birthday party’ lunch ready for Sam.  Sam and Natalie decorated the cake (which we got to bake in the oven in the apartment) and then we had a birthday lunch and birthday cake for Sam.


After lunch we watched a DVD that we had picked up from reception.  The rest of the daytime was spent playing with presents and enjoying the facilities in the beautiful suite we were lucky enough to stay at (including the Wii, the outdoor spa bath and the 3 TV’s).  At dinner time, Sam chose to go to KFC, so we headed to Sorrell for a KFC meal.  It was a nice low-key day and Sam had a great birthday.
Wed the 19th of December was a very quiet day for us.  We didn’t drive anywhere in the car and we stayed in the resort and made use of its wonderful facilities.  We used the Wii and the DVD player in our suite, and we also got to use the resort’s: pool and spa, the games room.  We also hired equipment for Tennis and Boules (Bocce), as well as playing in the playground.  The kids all played with Sam’s new presents too and so it was a nice quiet day on our last full day in the resort.
We all thoroughly enjoyed our stay at 7 mile beach.  It really felt like a bit of a holiday because we could just relax and use all the beautiful facilities we had available to us.  It was a shame to have to leave it, but it was time to start heading north again.