We sailed to Tasmania on the 7pm cruise on Wednesday the 5th December.  Boarding starts at 5pm at Melbourne’s Station Pier; and we were there, checking in not long after that.  However because we were a 'high vehicle' we sat and waited in the queue until 6:45pm before we got loaded onto the Spirit of Tasmania (and we watched all the 'small' vehicles get loaded in ahead of us).  Thankfully we had the DVD Player and the kids watched a DVD in the car while we waited.  Finally, we made it onto the boat, parked the car and went to explore the ship.

We had booked a 4 berth cabin and 1 ocean recliner seat (where Mike would sleep), so we checked out the cabin, the seat and then went to explore the rest of the ship.  Our ship was late leaving, and didn't leave until about 8:30pm.  We had dinner on the ship and then retired to our cabin for the night.  The kids were very excited, but managed to get to sleep (Josh was the last to sleep at 10pm!).  At about 10:30pm we left Port Philip Bay and headed into the swell.  There were 5 metre swells that night and the boat was rocking around for quite a few hours.  Thankfully we had taken Kwells and no one felt sick at all.  The kids all slept well, but Liz and Mike had a bit of a broken night sleep - but it was a great experience, and was a bit of fun. 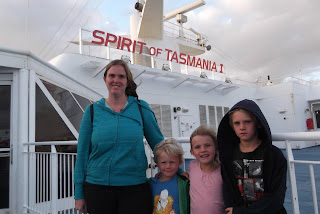 We sailed into Devonport at 6am on Thursday morning.  Our car was one of the first off the boat (because we were one of the last on) and so we got away from the terminal pretty early.  After breakfast at Maccas, we got on the road and started driving toward Wynyard on the North West of Tasmania.  We saw a few great parks, and the kids wanted to have a play, so we stopped and they stretched their legs for a while.
As we drove through Ulverstone, we saw a sign for Leven Canyon, and we decided that we'd make the trek out to see the canyon.  It was a nice drive through beautiful Tasmanian countryside.  When we got to the Canyon, we did the canyon floor walk first, and walked down to a bridge over the raging Leven River.
After our walk, we headed to the picnic spot and did the lookout walk to Cruikshank's lookout.  It was a spectacular view of the whole canyon.
We had a bite to eat out at the picnic area and then kept driving toward Penguin and on to Wynyard.  We checked into a caravan park for 4 nights as we had decided to 'base camp' to reduce the number of setup/packups we would do with our tent.  That afternoon we went for a swim in the heated indoor pool at the caravan park and then had an early night (which can be quite difficult when it is light until 9pm down in Tassie!).

On Friday morning, we stayed around the Wynyard area.  Mike and the kids played with some paper aeroplanes for a while at the caravan park.  The weather was quite cold, but not wet – which was such a blessing.
Firstly we went to Fossil Bluff, where there are millions of fossilised shells embedded in the layers of rock in the headland.  After Fossil Bluff, we drove to Table Cape.  Table Cape is most known for its flower growing (particularly Tulips where they grew 52 different varieties this year), however the Tulips had stopped flowering.  However, we stopped at an amazing lookout over the ocean.  The ocean was so still that day – not even a ripple seemed to be evident.  The seawater is so clear in Tasmania – it is just beautiful.  We then went to the Table Cape Lighthouse for a look and to have some lunch.

After table Cape, we drove up to Sisters Beach to have a look.  We got chatting to a nice couple and their 2 kids who were staying in the free-camp right on the beach.  They’re travelling around Australia in their converted bus, and our kids had a bit of a play with their kids while we chatted for a while.

The Next day was the Stanley Show, so we thought we would drive up to Stanley and go to a Tasmanian show.  On the drive up to Stanley the road was blocked because there had been a bad car accident and they weren’t going to open the road for a few hours, so we took a back road (along with plenty of other cars and trucks) through Forest to get to Stanley.  We were driving on dirt road for about 20Km, and we even had a shallow river crossing!  It was quite unexpected, but was a bit of fun.
When we got to Stanley, we went to ‘The Nut’ which is a large rocky headland (it is actually a lava plug from an ancient volcano).  It is about 150 metres high and has a chairlift or a walking track to the top.  We opted for the walking track – which was very, very steep but only 430m long!  We got to the top and walked to a really windy lookout over the ocean.  On our way back down the walking track, Liz spotted a little furry echidna digging for ants.  It was just off the path and we stopped and watched it for a few minutes as it dug around.


After walking the Nut, we went to the Stanley Show.  We watched some wood chopping and some cattle judging.  The kids liked the Animal Nursery where there were lots of cute little animals.  It was good to see a real country show.
When we’d had enough of the show, we kept driving west and went to Arthur River.  There’s not much out at Arthur River, but we went to the ‘Edge of the World’ lookout which looks over the Arthur river and out to the ocean.  As we drove back to Wynyard, we drove past countless Dairy Farms and enjoyed the greenery of the Tasmanian Countryside.
The next day we started our day by giving Bruiser a carwash at the caravan park.  He was filthy after the dirt road from the previous day.  The kids all got in and helped (and had lots of fun in the process).  When the car was clean, we drove into Burnie and did some Christmas shopping.  The kids chose presents for each other which was fun.  After our shopping expedition, we stopped at Burnie Park for some lunch and a play.  The park was a great one with play equipment, some Peacock’s and Peahens with baby chicks and a walk to a waterfall.  We spent quite a bit of time at the park.


We decided we’d go to the Visitor Information Centre in Burnie (Called the Maker’s Workshop) and we had a look at some of the art and craft that was going on there.  We also took some free paper from the biggest paper roll we’d ever seen (We were going to make paper aeroplanes with it).  While we were at the visitor information centre, we saw that the ‘Guide Falls’ were not too far out of Burnie, so we went there for a look.  We were at Guide Falls for about ¾ hour and we had the whole place to ourselves, so we built a dam in the river for a bit of fun.
We drove back to our tent in Wynyard through some very scenic countryside with dairy farms, flower farms and sheep paddocks.  We decided that we would go and see the Penguins behind the visitor information centre at Burnie at Dusk that night.  But unfortunately, Dusk is at about 9pm in summer in Tasmania!  So to bide our time while we waited for dusk we had dinner, made paper aeroplanes from the huge paper we got during the day (but they didn’t work too well!), and we had a family game of Quoits.  Everyone had lots of fun trying to get the rings over the target.
Finally, it was past 8pm and we drove into Burnie.  The Penguin observation centre behind the Burnie visitor centre is very well setup.  The volunteers gave a talk and then we went to watch the chicks waiting for their parents to return from sea with food.  It was very cold, but was a great experience, seeing the penguins.  It was after 10pm by the time we all flopped into bed back at the tent for a good night sleep.