In Canberra we stayed in the Exhibition Park Camping ground which just has the basic facilities of Showers and Toilets, and is only 8 km from the City Centre.

Day one in Canberra the kids quickly made friends with our new neighbours, a family who are travelling around Australia in their big bus, after a sufficient amount of time playing with our "new friends" we heading into Canberra to have a look around.  First stop was The Royal Australian Mint, Josh is very interested in money at the moment and was very keen to find out how it is made.  Unfortunately they weren't making any money that day but the kids were entertained watching the robots move around even though they weren't actually doing anything, we suspect they are just on a timer.
﻿
After a picnic lunch by lake Burleigh Griffin with the company of some Black swans and some Ducks, our next stop was Floriade.

We spent a couple of hours wandering around Floriade enjoying the beautiful flowers, checking out the reptile display and making pictures with fruit.

Day 2 in Canberra we did some much needed shopping to stock up on supplies of food.  It was Saturday and the Farmers Markets were on inside Exhibition Park, so we bought our fruit and Veg and then headed to the supermarket for the other essentials. 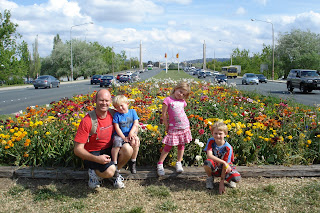 Next we headed to the National Museum of Australia,  which we have been to before with friends. Josh had been begging us to go as he wanted to build space ships at K- Space.  In K-Space you design on a computer your own space ships or houses and then you watch them in a 3D animation on a big screen.  We were the only ones there at the time and had K-Space to ourselves so we went through this process 5 times in a row and I think Josh and Natalie would have kept going if we had let them.

After another lunch by the lake we went to the National Film and Sound Archive and spent some time looking at some displays and enjoying the kids corners.  Then it was time to head to Parliment house for a look.
Our trip to Parliment house started with Tears,  it was a windy day and the water feature out the front of Parliment house was being cleaned and unfortunately some of the cleaner spray blew into Natalie's eyes.  So after finding out what they were spraying, washing Natalie's eyes and calming her down we headed through security into parliment house.  We had a good look around and sat in the Senate and the House of Reps and had a good run around on the grass on the roof,  after all this we were exhasted and headed back to the caravan.  The kids enjoyed playing with their "new friends" while we got dinner ready. 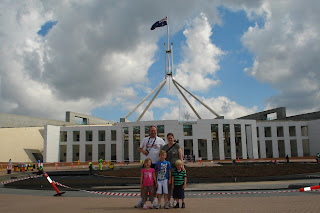 Tomorrow we head to Holbrook.