We left Echuca on Monday the 24th October and headed further down the Murray - bound for Swan Hill.  After a few days of free-camping, we decided that we needed to find a washing machine and a good bath/shower, so we looked for a caravan park in Swan Hill.  The Big 4 was expensive ($57 for the night) but was really great.  We enjoyed the drive from Echuca, and pulled into Swan Hill at about 2pm.

At the Big 4 there was a 'Go-Kart' Track that the Kids enjoyed riding around on, as well as a large playground area.  We found the heated pool and all cooled off in the pool until a storm hit about 5pm and it bucketed down with rain while we ate dinner.  As planned, we used all the facilities the Big 4 had to offer, and caught up with all our washing (both clothes and kids!), and decided that one night in Swan Hill was enough, as we weren't willing to pay for another night at that price. 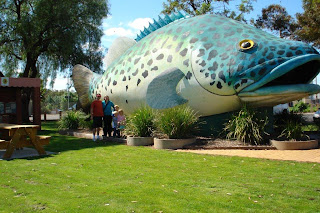 On Tuesday we checked out of the Big 4 but needed to get some school work done, and to see the sights of Swan Hill, so we drove into town and parked the Van near a playground.  We found the 'Giant Murray Cod' and had a play before Josh and Liz got stuck into School while  Mike and the other two went exploring. 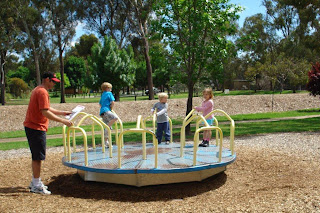 After consulting our faithful 'Camps 5' Free-camping book, we decided that a good spot to stop between Swan Hill and Mildura would be 'Passage Camp'.  With the directions programmed into NavMan, we were on our way.  it wasn't going to be a huge drive to Passage Camp, so leaving at midday from Swan Hill wasn't going to be an issue.
We arrived at the road to Passage Camp (which was a dirt road) and realised that it was a bit more "four-wheel-drivey" than just a general dirt road!  We thought we were up for the challenge (and would get a great campspot) so we let some air out of the tyres and headed along a very bumpy dirt track.

Being conscious that our caravan is not an off-road van (and has very low clearance), we persisted towing the van along the track past fallen trees and carved up road, but after a while we decided that the best course of action would be to unhook the van, and take Bruiser to try and find the campspot (and determine whether we could actually get the Van through).


Without the van, we carried on for a few Km's, but soon realised that there was no way we could get the van through.

Being very close to the Junction of the Murrumbidgee and the Murray, we decided to go and have a look at the junction, but after passing even more obstacles that made us slightly uncomfortable (including losing the track for a bit), we decided to abandon the whole idea and look for a new spot to spend the night. So we reversed the whole process that we had just undertaken for the last hour or so and re-hooked up the van and carefully drove the gauntlet back to the main road - stopping to get our tyres back to Highway pressure. 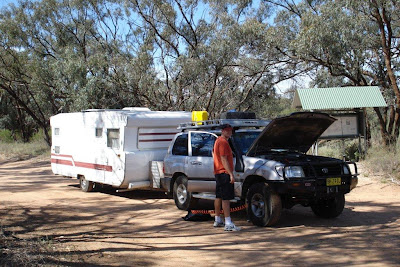 By this time it was getting quite late in the afternoon, so we opted for plan B, and drove onto the next town and camped at a small caravan park in Boundary Bend which was $17 per night (and you can tell the difference $40 extra buys per night!!).  Although the park was simple and the water was undrinkable, the kids had a good time playing on an 'old School' playground they found. 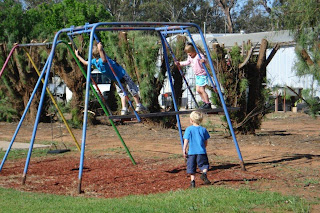 Once we left Boundary Bend, we wanted to find one night's accommodation near Mildura, and we found a free camp in Merbein which is not far out of Mildura, so we headed there.  The Merbein campspot ended up being Liz and Mike's favourite campspot so far with its idyllic location and its beautiful outlook.

After getting the Van into the right spot in Merbein, we locked it up and went into Mildura to look around the town.  During our drive around the town, we stopped at "Lock 11" and as luck would have it, there was a paddle steamer ready to enter the lock and head up stream, so we got to watch the whole process occurring, which was very interesting for the whole family.

Well done!Have fun and stay safe.Keeping you in my prayers. Special love to Josh.Keep up the good (school)work! Looking forward to the book-Best Kids Parks in Australia by Liz Mason.
Love from Narelle.