Bible in the Bush

On Thursday 27th October, with only a short drive from Merbein to Red Cliffs, we took the opportunity to do some school work in the morning.  After Josh's schoolwork, we packed up our van and headed down the Calder Highway.  We arrived at the Red Cliffs Caravan Park and spent the rest of the afternoon getting the van setup (and did a bit of shopping to replenish supplies).

The main reason for going to Red Cliffs was to stop in at "APOSS" (the Anglican Parish Of Sunraysia South - another BCA church that we had been in contact with).  The timing for us could not have been better.  On the weekend (28th to the 30th October), APOSS was holding their 4th annual 'Bible in the Bush' weekend.  Dale Barclay, the Minister of APOSS, had organised a couple of jobs which we could assist with on the Friday, so on Friday morning we met Dale at St Mark's and started doing a few jobs to prepare for the weekend.  Friday really started to heat up, and after we'd finished at the church we went back to the Caravan Park (which didn't have a pool) so the kids had a great time cooling off in the sprinklers. 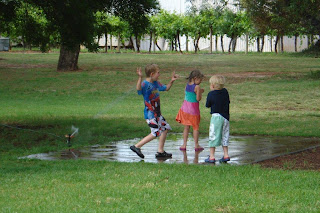 Bible in the Bush first came into being in 2008 with the goal of providing a weekend of good quality Bible teaching in a rural/regional area, so that people may hear God’s word and in his grace obey it and be transformed by it.  The main speaker for Bible in the Bush 2011 was the Right Reverend Stephen Hale, from St Hilary's.  Stephen was speaking on 2 Peter throughout the weekend, and we both thought his teaching was fantastic.  The Music Team was also from St Hilary's and they did an awesome job throughout the weekend.  The kid's ministry team came from Melbourne's Glen Waverley Anglican Church (GWAC).  Our three kids had such an excellent weekend of fun and Bible Teaching - they really thought that it was the best weekend of our trip so far. 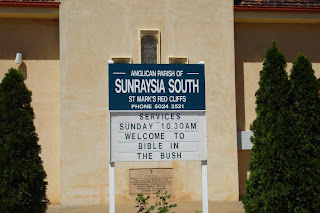 The weekend started on the Friday night with dinner and the first talk (and Kids program).  It was a bit of a late night for the kids, but they thought it was unreal being up so late - and were loving playing with all the other kids.

Even though Liz and Mike had a couple of jobs to do throughout the weekend, (including running the bookshop, watching the coffee machine, helping with setup/pack-up of the dining room, and some general cleaning) we still managed to get to most of the sessions and enjoy great fellowship throughout the weekend.

The Saturday morning sessions were great and after a lunch together, some of the kids and adults went to the park for a play, while the other adults participated in workshops - which were very useful.

Saturday night was another late night, with an early evening session followed by a beautiful dinner together.  After dinner, the music team entertained us all with renditions of some golden oldies.  Unfortunately Mike (and Dale) didn't make all of the evening entertainment as they were otherwise occupied with someone that walked in off the street who needed some help.

Sunday's session was a normal weekly church service for APOSS followed by lunch (which they also do weekly) and was an excellent end to a great weekend.

We feel so blessed to have been part of such an encouraging, uplifting weekend, and our thanks go to Dale & Rachel and the team for allowing us to be part of their weekend.


We were pretty busy with Bible in the Bush, and we didn't get much time to see the sights of Red Cliffs over the weekend, so we decided to stay another night.

Monday morning was a quiet start to the week with a bit of a sleep-in for 3 very tired kids (and 2 pretty tired parents!).  We also got to have a play with some friends from GWAC, who had been camped at the Caravan park.  After saying goodbye, we started some school work, and some other friends from Bible in the Bush dropped by for a quick play.  After lunch, we wanted to look around the town and surrounding area so we went for a drive to explore Red Cliffs.  We found 'Big Lizzie' at the park, and managed to find the Red Cliffs of Red Cliffs.

We really did enjoy our time at Red Cliffs with the folk from APOSS.  We will have fond memories of this part of our journey