Since we were going to be without the caravan for a few weeks we decided to continue on with our trip and come back for the van.  So our next destination was Inverloch where we stayed with Liz's Aunty Jackie and Uncle John, in their beautiful house by the beach.

We left Warragul and headed south through some absolutely beautiful countryside - green rolling hills as far as you can see.  We stopped in at the visitors centre in Korumburra to have a lunch break and found Coal Creek which is a historic village that displays some of the coal mining history of the area. We spent a bit of time having a look around coal creek before jumping back in the car and heading to Inverloch.


We started our stay at Inverloch with a walk along the beach & Esplanade with Jackie, where the kids found a great climbing tree, and then headed out in the car to Eagles Nest (which is a rock formation at the end of one of the headlands) and Cape Patterson, before heading back for dinner.
The next day we headed south to Cape Liptrap and found the lighthouse, it was extremely windy and we almost got blown away [and unfortunately our camera did get blown away and broke :( ], so we continued on and found Bear Gully which is a beautiful camp spot right on the beach, then we found the small town of Walkerville South where there are old Lime Kilns right on the beach.  The beach was so beautiful and the weather was so good, the kids just couldn't resist getting in the water, so after their paddle turned into a swim! we headed back to the car and changed them into their swimmers to travel home, as you do.

We have started a list of all the living wild native animals that we have seen on the trip, and this day we added two echidnas to the list.


Day two we headed to Philip Island, our first stop was the Philip Island Chocolate Factory where we picked up a few samples to try.  Then we headed to the Churchill Island Historic Farm, we spent a bit of time looking around, patting animals and going on a wagon ride.
Our next destination was the Koala conservation centre,  where we found a number of Koala's including some baby's. 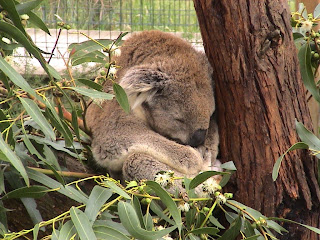 Then we headed out to The Nobbies,  where there were hundreds of nesting sea gulls and their babies,  with our binoculars we could see the seals out on the rocks and as we walked along the boardwalk we also spotted a few penguins in their burrows.  By this time it was dinner time so we headed to Cowes ( the main town on Philip Island) and bought some Pizza's and had a picnic at the park.  After dinner we headed to the Penguin Parade.  We found some seats right down the front at the sand and waited for the Penguins to arrive,  and since it was breading season we saw hundreds of them come ashore in groups of up to 20 or 30 and waddle up the beach and then up the hills to their burrows. It was high tide with quite a big swell and at one stage we had to lift our feet to avoid getting wet. As we walked back up the board walk we watched the penguins (only an arms length away) waddle along and we even spotted a few babies waiting for their mums.  The kids thoroughly enjoyed the penguins, and they all coped extremely well as it was so late, we arrived back at Inverloch at 10.30pm.

Keeping tabs on you! Glad to see that a few small disasters are no match for the Masons!I remember the penguins on Philip Is - just amazing.Loved the climbing tree guys!-Tracey DS