The Masons do Melbourne!

After spending a month out of a big city, driving through Melbourne’s busy toll roads, to get to our caravan park, felt very stressful!  But we made it through and settled into our very small (predominantly permanent resident) caravan park. There were only about seven sites for “non-permanents”, there was no room to put the awning out, and also nowhere for the kids to run around, but it was cheap J.


The next morning after getting school work done we headed out for the day to explore Melbourne, our first stop was Brighton Beach,  where we had fun looking at all the painted beach huts and walking along the beach. 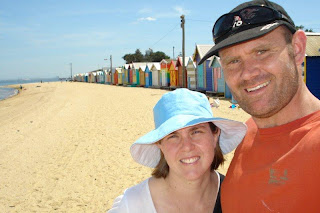 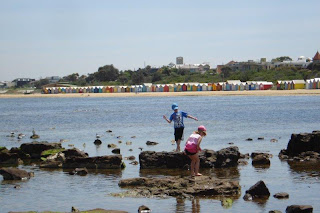 The kids were keen to ride on a tram, so our next stop was St Kilda were we caught a tram into the city.  While in the city we spent a bit of time looking around, and we did a loop of the city on the tourist tram and even managed to find a great playground by the river. We found an exhibition to go to called screen worlds, which had lots of computer games to try and also talked about the history of TV and Computers.  We all had a lot of fun playing Wii Mario Kart on a massive screen.  By this time it was starting to get quite late and we ended up catching a packed peak hour tram back to St Kilda, we were very thankful when two ladies gave up their seats for us and we squeezed four of us on those two seats.  After grabing a bite to eat for dinner we headed into Luna Park to have a look around, the kids of course were very excited and wanted to ride on everything. But since it was already 7.30pm and everyone was already tired we decided we would get better value for our money (and have more fun) if we came back the next day, so we headed back to the caravan for the night.

The next day we had a very lazy morning watching TV and had a late breakfast (because Luna park doesn’t open till 11am!), we headed back to St Kilda and spent quite a few hours having an absolute ball at Luna Park.  We all had fun on the roller coasters, the flying elephant ride and the carousel. Mike, Josh and Natalie all loved the pirate ship, Mike, Liz and Josh enjoyed “the Spider”, and Mike and Josh’s stomachs nearly turned inside out when they rode on the Enterprise, which spins very fast around and upside down. As it was a beautiful sunny day the park got very busy in the afternoon and the cues for rides were getting very long, so once we had had quite enough fun we headed to Brighton and had a picnic dinner on the headland (which we had prepared in the morning using our Dreampot) before returning to the caravan - exhausted.


We wanted to go to church while we were in Melbourne, and The kids ministry team from Bible in the bush in Red Cliffs, were from Glen Waverly Anglican church (GWAC) in Melbourne.  So the next day being Sunday we headed to GWAC for the 10.30am service, where we were very warmly welcomed. Our kids were so excited to see some other children that they knew (from Bible in the Bush) and they all had a great time at kids church and we really enjoyed the GWAC Service.  After church, we were invited to lunch at a Pizza restaurant (which had a playground) which was really lovely.  We had a great chance to catchup with our new friends while the kids played.


We want to thank Bob, Ian & Natalie, Zoe, Fiona & Andrew and all the other people we met at GWAC for making us feel so welcome.
at Friday, November 18, 2011

It was fantastic to have you all at GWAC last week, I'm with the kids, it is great to see people you know. I hope our paths cross again sometime.