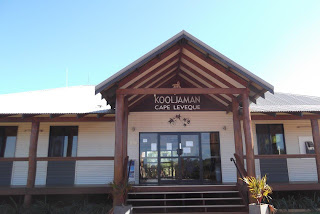 On Wednesday the 23rd of May we headed to Cape Leveque.  We made pretty good time in the morning as we had to get all final bits and pieces into the car and say goodbye to the van for a couple of nights (something we hadn’t done since Warragul in Victoria).  We were on the road up to Cape Leveque by 10:30am.  The road up the Dampier Peninsula to Cape Leveque is about 200Km long.  The first 100Km is a sandy dirt road that has lots of corrugations and uneven surfaces.  We locked our hubs and drove in 4WD along this section of the road, but we still travelled at about 70Kmph (except when we were approaching oncoming traffic) so it wasn’t too bad.  However there was evidence that other cars didn’t fair so well with bits of muffler, shattered windscreens and the odd burnt out car along the side of the road.  The final 100Km is a good sealed road.  We stayed at a place called Kooljaman, which has a 5Km driveway with quite deep sand on the dirt road which was a bit of fun to drive on.

It was about 2pm by the time we’d found Kooljaman, booked in, unpacked the car, setup the tents (we bought a second tent for $30 at Woolies so that we’d have a place to store our gear so that our main tent wasn’t quite so squashy!) and had a late lunch.  Kooljaman was a beautiful spot, and we were very impressed with the campsite.  We decided to go for an explore over the top of the ridge and to the beach on the Eastern Side of the Cape.  On the beach, we bumped into the Leonard family who we’ve seen a few times along our travels and had a brief catchup before heading back to the tent for dinner, showers and bed.


At about 3am that night, a big wind started blowing through the campsite.  All 5 of us woke up when the wind started, and the wind only got stronger and stronger.  The tent walls blew right down onto our faces numerous times during that night and we all got up a bit tired the next day!  The wind did not abate for the rest of our time at Cape Leveque, which was a little painful, but we had a great time nonetheless.


We had finished breakfast by 7:10am on Thursday morning, so decided to go for a walk over to the Western Beach, however the wind was too strong and blew dust into our eyes and whipped sand into our legs so we abandoned the walk and jumped into the car to go for a little drive instead.


We wanted to visit a couple of other sites along the peninsula and so we drove to the Cygnet Bay Pearl Farm to have a look.  We saw the Leonards again, and had a look through the Gallery as well as a walk to the lookout behind the farm.
After the Pearl farm, we went to the Ardiyooloon community (at One Arm Point) to visit the Trochus hatchery (Trochus is a sea snail that lives in a large pointed shell which is very shiny when it is polished).  The hatchery didn’t only have Trochus, but had large tanks with all sorts of sea creatures in them.  We had a brief tour and got to look at (and touch) many of the creatures in the tanks. 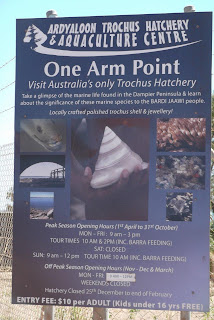 That afternoon, back at the campsite, we went for a longer walk along the Eastern Beach of Cape Leveque.  We played hide and seek in the rocks for a while and had a good walk along the beach.  When we got back to the tent our kids met the neighbours kids (who were also travelling) and spent quite a lot of time hanging out in the tree between our two camps and playing together.

Thursday night was windy from the start of the night :( and no one had a particularly great night’s sleep with lots of interruptions due to the noisy winds, bits of branch falling on the tent and strong winds almost pushing the tent over.  But we made it through the night, and Friday was Mike’s Birthday.  We started the day with presents for Mike, before packing up the campsite and heading out of Cape Leveque to Beagle Bay where we stopped to have a look at the famous Beagle Bay church (which has lots of Pearl shells decorating the inside of the church).


When we left Beagle bay, we drove back down the bitumen onto the Dirt road toward Broome.  When we were coming to the end of the dirt road, we turned off and went to the Willie Creek Pearl Farm to have a look.  We decided that we’d go on a tour as a special treat for Mike’s Birthday, so we signed up for a tour.  We had a quick bite to eat and the kids had a play at the playground while we waited for the tour to begin at 2pm.

It was a very interesting tour, and the kids were engaged the whole time.  Mike got to pull a Pearl out of the oyster at the demonstration, and there were 2 Keshi Pearls inside the oyster (which is quite rare) Unfortunately he didn’t get to keep them!


Part of the tour was to take a boat out to part of the farm where they pulled up some Oysters and cleaned them up.  After looking at the farm, we took a bit of a cruise up the river to try and spot the resident Saltwater crocodile, but we didn’t see it that day.  It was quite late (about 4pm) by the time we left the Willie Creek Pearl farm and headed back to Broome.

We stopped off at the caravan quickly to drop off some gear and then went down to Broome’s Town beach to have some fish and chips at Roebuck bay for Mike’s Birthday dinner.  After dinner we had a birthday cake back at the van for dessert.  It was then time to get ready for bed.  All the kids (as well as Mike and Liz) went to sleep very quickly that night and enjoyed a wind-free night on our own beds in the caravan.