We left Exmouth on ANZAC Day and headed to Tom Price.  We were on the road by about 8:30am because it was almost 600Km to Tom Price and we knew it would be a big day.  The last time we’d had such a big day was on the Nullarbor Plain!! (from Eucla to Fraser Range station), so it was a pretty long haul.

It was a hot day, and we had the air conditioning on all the way, but that kept us nice and comfortable.  We drove through some magnificent country (all very arid) on our way to the Pilbara.  It would be a very different landscape in the wet because we passed so many floodways and large dry river beds.


We had a couple of rest stops along the way and topped up with Diesel at the Nanutarra Roadhouse which was the most expensive roadhouse we have come across (199.9 cents per Litre!!!  Talk about highway robbery, but I guess that’s part of the remote outback we’re driving through)


We took the dirt road to Tom Price which bypassed Paraburdoo but saved us at least 80Km’s and it was a good road (with the occasional severe dip in it).

We pulled into the Tom Price Caravan Park at about 4:30pm and did a very quick setup before heading to Coles (yes Coles!) to do a big shop and re-stock everything we needed for a week out in the Karijini National Park.


The next morning, we stopped in at the Visitor Centre at Tom Price to get some information and pickup a permit to use the Railway Access road North of Tom Price.  We were not sure if we'd use that road, but we wanted to have a permit to do it, just in case we choose that route to Millstream/Karratha after we had finished at Karijini.  We also stopped to look at a huge dump truck that is on display in the Rio Tinto town of Tom Price.  It towered above Bruiser and the Caravan and was an impressive sight to see.  It was then time to drive to our next Campsite in the Karijini National Park.


Along the way to Karijini we had to pull to the side of the road to let a massive oversize truck pass.  It was a truck towing another truck (equivalent to a train with 2 engines) which was towing a very wide Bulldozer – quite impressive.

When we got to our campground, we paid for 5 nights accommodation and setup in Dales Campground.


In Esperance, we had bought a WA National Park Pass and we are sooo glad that we did.  The pass has saved us hundreds of dollars in Park Entry Fees since entering WA, and it saved us another $55 in Karijini too - yippee.


After lunch we drove to the Visitor Centre in the National Park to have a look.  On the way back to the caravan we stopped at the Circular Pool Lookout and saw an impressive gorge that we would definitely be back to (to swim in the pool at the bottom).  It was quite late in the afternoon by that stage, but we got into some schoolwork for Josh and Natalie while Sam played with some Playdough.


On Friday morning, we felt the coldest we had felt in a long time.  The nights at Karijini are very cold.  This makes sleeping much easier than in the heat and the kids stayed under their doonas until 7am.  As soon as breakfast was out of the way, we got stuck into school for Natalie and Josh, and did school all morning.  After lunch, we went down to look at the Fortescue Falls and Fern Pool (an amazing freshwater pool in the bottom of a Gorge).  It was another cloudless (and hot) day, and by the time we hiked down to the river at the bottom of the gorge, we were ready for a swim.  We had a quick look at the falls, and then hiked a few hundred metres further to an absolutely beautiful Pool, with a waterfall at one end.  The water was so clear it was amazing.  The pool is very deep and Mike brought a snorkel to dive down and see what was around.  We didn’t think there would be any fish, but there were hundreds of them in the pool, only about 5cm long, but they were everywhere and even nibbled your toes if you dangled them in the water and kept them very still.

We swam to the waterfall and had a ‘shower’ and we all had a really good swim.  The water was refreshing but not cold and the waterfall felt warm as the water heated up on the rocks above.  We really enjoyed Fern Pool and the Fortescue Falls.

Saturday we headed to Weano Gorge on the other side of Karijini National Park. Along the way we stopped in at the lookouts to Joffre Gorge and the Knox Gorge. From here we continued to Weano Gorge and we went to the Oxer lookout where 4 Gorges meet. It was very spectacular. We then headed down the Handrail Pool track knowing full well that the walk changes from being a Class 3 walk to a class 5 walk part way along; but we thought we would just see how far we could get comfortably with the kids.  After walking down into the Gorge, we found the Gorge to be quite Narrow and we soon came to water, we could see other people heading through the water and it was deep, so we striped down to our swimmers and swam through the water along the gorge, Mike held our back pack above his head.  The water was like ice, but we all made it through.  On the other side we found that the track ahead was too steep and slippery for us to continue safely so we turned around and swam back through the gorge.

We continued a short distance back along the track to another pool we had passed and the kids had fun playing in the little water fall there before we hiked back to the top. 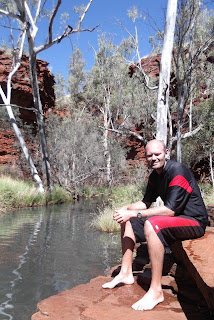 Once we reached the top we had a picnic lunch.  After lunch we hopped in the car and headed back towards the caravan.  On our way back to our campsite we stopped in at the Eco Resort as we knew some of our travelling friends were arriving there that day.  We spotted their camper as soon as we entered they had just arrived and were setting up.  The kids got straight into playing with their friends Lucas and Patrick.  It was Patrick’s birthday and we ended up staying and sharing a birthday cake with them.  After saying goodbye to our friends we headed back to the caravan.


Sunday morning was quite a relaxed affair with pancakes for breakfast.  The night was cool again but the day heated up very quickly.  Mid-morning we drove to Mt Bruce (dumping our rubbish at the rubbish point along the way) to have a look at the Marandoo Mine Site.  The mine was far away way from us, but we got to see the site, and we had a good walk at the base of Mt Bruce.
When we got back to the caravan, Leanne, Greg, Pat and Luc arrived on their way to Dales Gorge.  We had a brief catchup with them at our van.  They left to look at Fern Pool, and we got dressed and went to Circular Pool.  The walk down to circular Pool was quite steep and very spectacular.

When we got to the pool we all had a swim in the very cold water.  We enjoyed swimming with the towering cliffs on 3 sides.


After walking back up the gorge, we spent the rest of the afternoon around the van.  After dinner we got out a few sparklers and the kids waved them around in the dark.  We were quite surprised at how early it seems to get dark in Karijini and it was quite nice to have the hot days cool off quickly as the sun went down.


Monday morning meant we were back to school.  Natalie and Josh both did lots of schoolwork in the morning and we finished school for the day at about lunchtime.  After lunch, we went back down to Fern Pool to swim (as it was a very hot day on the Monday).  We had the whole place to ourselves for the hour we were there which was lovely.  We had a great swim and felt very refreshed, even after climbing the steep steps back to the top of Dales Gorge.


The next day we had to pack up the van  to head back into Tom Price before heading North.  We did some more schoolwork in the morning, and then packed up and drove into Tom Price.  We stayed in the caravan park and went to Coles for another re-stock of supplies.  Liz and the kids went for a swim and Mike spent quite a bit of time running around town trying to fix a broken tap on the caravan.  He finally managed to get hold of a plumber who helped him out.
We loved our time in Karijini National Park.  It is such a beautiful place and we would definitely recommend it to anyone.
at Sunday, May 13, 2012