When we were leaving Karratha on Wednesday the 16th May, we decided to do a fairly big day (400Km’s) to take us to Cape Keraudren, we left the Karratha 'Big 4' at 10am and drove to Port Hedland for Lunch.  Along the way we saw lots of big river systems that were mostly dry.  It would be a very different experience to see the Pilbara in the wet, but we’re certainly enjoying the cloudless blue days we’ve still been getting.


At Port Hedland, we stopped at a park by the water to have a picnic lunch, and let the kids run around.  It really is handy to have the caravan with us as we travel so we can just grab all the things we need to make lunch at a stop like this.  We had a look at the port and got to see some ships being filled with Iron Ore.  We also saw one leaving the Port – it made the tug boat behind it look like a toy it was so big!  On the way out of town, Mike gave Bruiser (the car) a drink while Liz and the kids went and had a look at some old trains that were on display nearby. 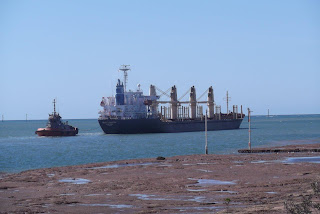 After Port Hedland, we got back in the car and headed to Cape Keraudren.  We passed heaps of Road Trains that day (mostly dragging 4 cars behind them).  We were even overtaken by a roadtrain too (but it only had 1 car behind it) - we just couldn’t get above 80Kph with the headwind we had.  We pulled into our campsite about 4:30pm and setup the van right at the top of the sand dune next to the beach.

The next day, we went to the beach for a walk before starting school.  As we walked along the beach, we beachcombed and found some really big shells washed up on the beach.  We collected some of the best ones and had a great morning walk.  We did lots of school that day.  It was a perfect location to do schoolwork as it wasn’t too hot – the breeze kept us cool all day.

While Josh did some school, Mike installed a new handle to Bruiser’s Boot (to replace the one that broke in Exmouth).  Mike picked this handle up in Karratha when he told the Rego inspector that the handle was broken, and the rego inspector said that he was sent the wrong one for his 80 series Landcruiser!  So $20 later the boot is now fixed again (yay - no more opening it by pulling a string)!


That afternoon, the tide was way, way out to sea, so we went for a walk toward the water.  As we were walking down to the water, we came across some humongous (and quite beautiful) shells which we took with us.  We had a huge walk along the beach and didn’t get back to the van until it was after sunset (about 5:45pm).  The kids ate dinner hungrily and we all settled down for a good night sleep.  The nights were surprisingly cold (compared with the hot humid nights in Point Samson) and we all had doona’s on – but I guess it is Mid-May and almost winter!


On Friday morning, we got stuck into school again after the normal Morning routine (get up, get dressed, eat brekkie, do dishes, do teeth, read the Bible) and once Josh and Natalie were finished their school, we packed up and drove North East.


We had heard that 80 Mile Beach Caravan Park was very nice, so we drove the 100Km’s and booked into a beautiful caravan park nestled right next to the first sand dune behind the beach.  It was a great spot (albeit a bit more expensive that we thought it might be).  That afternoon we went for a quick walk on the beach, and then took Bruiser out onto the sand to drive along 80 Mile Beach.  The tide was very low, so there was lots of sand to drive on.  When we were a few Kilometres away from the caravan park, we stopped the car and looked through some of the shells on the beach.  We also had a game of improvised ‘Boules’ with rocks and shells on the beach – it was great fun.


We had heard good things about “Barn Hill Station”, so the next day we drove there to camp for two nights.  The driveway in from the highway was pretty rough and corrugated, but we found the place OK and checked into the unpowered section (the powered section was only 4 amps and couldn’t run air conditioners or microwaves, so we opted the cheaper, unpowered sites).    After setting up the van, we went for a walk around the area and down to the beach before watching a magnificent sunset and having dinner.  Liz and the kids saw a small brown snake at the toilets so we were on guard for any footless friends that we may come across!

The next morning, Natalie and Josh did their school work until about lunchtime, and in the afternoon we went for a long walk along the beach.  The kids and Mike played in the water on the sand for a while, building a dam with some rocks on the beach, it was a bit of fun.  Later that afternoon we went back to our caravan, and a medium size Black Headed Python slithered right under the car and past the caravan.

We enjoyed our stay at Barn Hill, but for some reason our expectations were pretty high and we weren’t all that wrapped with it.  Nonetheless, we enjoyed the showers and toilets with no roof and the scenery in the area.


After packing up the van the next morning, we set our sights for Broome.  We checked into the Broome Caravan Park at about 1pm.  The peak season has not quite hit yet (probably another 2-3 weeks before all the caravan parks start getting full) and so because it wasn’t too busy the Broome Caravan Park agreed to store our van (on our site) for $10 a night for the 2 nights that we would be up at Cape Leveque, so that made it very easy for us.  On our first afternoon in Broome, we drove into town to have a look around and then went out to Gantheaume Point in search of Dinosaur Footprints (we found 1).  Afterward, we drove to Cable beach for a look Broome’s famous Beach.  We saw some camel trains heading out for their afternoon walk along the beach.  We swam in the pool when we got back to the caravan park, as it was a pretty hot day.  That evening, the mozzies were so bad we had to eat inside the van (a rare occurrence for us).


We spent all of Tuesday getting ready to head to Cape Leveque.  We did a big shop and then we re-organised the car because you can’t take a caravan to Cape Leveque (the road is too bad) so we packed the tents, sleeping bags and all our camping gear ready to head off the next morning.  We were treating this 2 day trip as a ‘dry run’ for our Gibb River Road trip (which we will also do with our tent and sleeping bags) so we wanted to make sure we could fit everything we needed into the car.  We managed to pack things on the roof and inside the car to find a home for everything we wanted to take with us.  It was quite a busy day, but we still managed to have a swim in the pool at the caravan park which the kids loved.
at Sunday, May 27, 2012