We arrived in Carnarvon and checked into the Wintersun Caravan Park, we were planning to stay just two nights but they had an offer of pay two nights get the third night free so we decided to stay for three nights.  That afternoon we headed into town and bought some food for dinner and then headed back to swim in the pool.

The next morning we got stuck into getting school finished for the term,  all we had left to do was an Art Unit.  The kids had to make a hat and they decided to make an Easter Hat,  so just using bits we could find around the caravan (eg. cereal boxes)  we made three Easter hats and took photos of them to send to the teacher.


Once we had finished making hats, we headed into town to do a big food shop as Carnarvon has a Woolworths and we haven’t seen one since Geraldton and there is not another until Karratha, So it was time to stock up.  We then headed back to the van to have a swim.

The next day we set off into town to have a look around.  We found one mile jetty which has a train that runs along it, but of course the train doesn’t start running until Easter so we walked the one mile jetty.  The jetty was not in as good a state as we thought it might be since a train runs along it, but it was a nice walk out and back and the kids did really well to walk the 3km return trip. 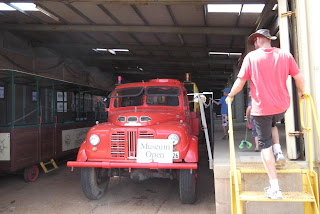 From here we drove out to Pelican point for a look and then made our way back into town.  We then made our way to the Aboriginal Cultural centre for a look, and we admired the OTC Dish from a distance (as it is currently closed) and from here we headed out to “Bumbacks” Plantation to sample some real fruit ice creams.  That afternoon we played in the playground at the caravan park. 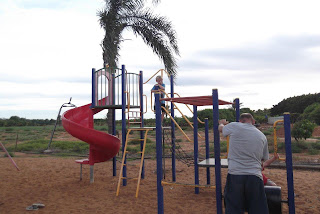 Hi Masons, continuing to be massively jealous of all your adventures. Love reading your blog and especially the photos. Loved the shell photo. Sorry I haven't commented for a while just been busy. Caroline grew up in Karratha so I'll have to remind her to follow your progress. One of the streets in Karratha is named after her family, as they were amongst the original families there. It's called Birch Pl/St/Rd whichever. Lots of love to you all. Tom