By the time we had finished doing all the things we needed to do at Carnarvon on Tuesday the 10th April (after leaving Quobba Point quite early) it was nearly Lunchtime, so we jumped into the car and stopped at the first rest stop heading North out of Carnarvon to organise some sandwiches to eat in the car as we drove and listened to a Famous Five Audio Book.  It was a very hot day (probably 38ish) and we had the air conditioning going full blast almost the whole day.  We were heading for a cheap camp at Warroora Station (14 mile beach camp) and so we followed Navman's Green Line for just over 200Km’s.  Along the way North, we passed a sign telling us that we were crossing the Tropic of Capricorn, so we stopped and got a photo! 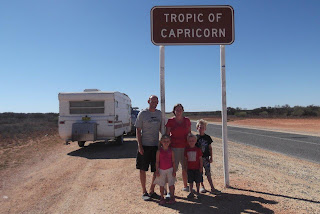 When we were looking for our campsite we drove for 5-6K’s on a very bumpy dirt road and then found a track heading to the coast.  We weren’t quite sure what we were getting ourselves into, but when we popped over the hill and saw the water and the beach, we knew it would be a beautiful spot.  We setup camp, went for a swim and cooked some dinner.  The evening breeze blowing through the van was fantastic and cooled us well on a hot night.  We had a quick stargaze that evening because the moon hadn’t risen yet, and the stars were mindboggling.    It was awesome.  There were heaps of Ghost Crabs on the beach and they scavanged around the caravan during the night.  We had to be careful we didn't step on any.


On Wednesday morning we drove 30Km’s into Coral Bay to have a look at the town and see if we could snorkel or go on a glass bottom boat.  All the Glass bottom Boat tours had left for the day, so we donned the swimmers, had a look from the lookout and then had a snorkel on the inner reef (just off the beach).

We found that the snorkelling was much better at Quobba Point (where we had stayed previously) because you didn’t have to dive deep down to see the coral and fish at Quobba, whereas in Coral Bay, there weren’t many fish and you had to dive quite deep to see anything (which none of the kids could do).  Nonetheless, we had a good hour or two swimming, digging holes in the sand and playing at the beach.  We had a picnic lunch overlooking the bay before grabbing an icecream at IGA to cool us on the way back to the caravan– because it was another 38ish degree day, and quite steamy.


We swam again at the beach when we were back at the caravan site and when we were getting dinner ready that afternoon a very brief shower of rain came down for about 5 minutes - that was the first rain we had seen in months!  God has blessed us richly with the weather we have had on our trip over the last 6 months.

Thursday Morning meant that it was time to Move north once again!  We had booked into a caravan Park in Exmouth while we were in Perth (we booked ahead because it was going to be school holiday time and we wanted to make sure that we had a place to stay).  So on Thursday morning, we got up, packed up and drove a couple of hours North to Exmouth.  We passed lots of Termite mounds along the way North (which we hadn’t seen on our travels until that point).  It was an interesting (and very arid) landscape along the way to Exmouth.