The road out to Monkey Mia has lots of interesting things to stop at and have a look at.  Our first stop was Hamelin Pool to see the Stromatolites (rocks formed by cyanobacteria that were thought to be extinct and only appear in this pool and somewhere in the Bahamas!),  they were amazing to see and the scenery was beautiful.


Our next stop was at Shell beach, instead of sand the beach is covered in tiny shells!


From here we continued on to Eagle Bluff, from the viewing platforms you can see the shallow waters below and spot marine life.  We saw a number of large rays and a few sharks,  we were hoping to see a Dugong but there wasn’t any there.


After Eagle Bluff we headed straight to the Monkey Mia Dolphin Resort and checked in (they have a caravan park). On arrival we ran into a Sharon and Wayne and their two you boys whom we had met at Lane Pool Reserve.
Monkey Mia was so beautiful,  it’s in the middle of nowhere and we really felt like we were staying at a resort on an island.
There were lots of Emu’s that walked around the resort we counted at least 14 of them.


We quickly found the pool and settled into resort life.

The next morning we were up nice and early as the best time to see the dolphins is between 7.30 and 9.00am.  We joined the growing crowd on the boardwalk to watch the dolphins come in and then everyone went down to the water with the rangers for the dolphin feeding. Five dolphins came in for the first feeding.  It was amazing to have them swimming so close to us.


After this feeding we went and watched part of a documentary on Dolphins at the theatre and then had a look through the shop, while we were in the shop we heard the call come through to the Ranger that the dolphins had come back in and they were going to do the second feed, so we went back  down to the beach to join in. There was only about 40 people at the second feeding, the lady next to us in the line of people was invited to come out and feed one of the dolphins and she very kindly gave up her invitation to our kids.  So Josh, Natalie and Liz (Sam had already lost interest and was digging happily in the sand) went out to feed the dolphin (Piccolo).  Unfortunately  Piccolo refused the feed (which she did at each feed we went to) but we were still very excited to have had such a wonderful experience. 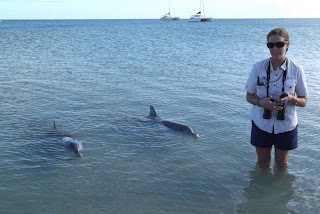 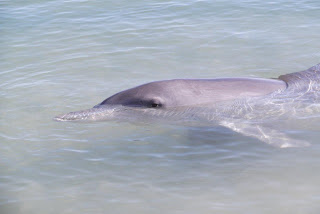 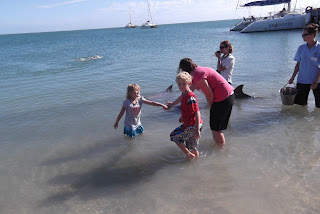 That afternoon we saw a sea turtle off the jetty and while we were swimming a couple of dolphins swam past, one of them came right up to us as.

The next morning we had time to go and see the first feeding again before packing up and moving on.  We really enjoyed our trip to Monkey Mia. 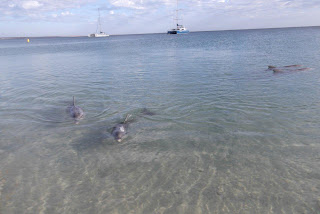 After leaving Monkey Mia we head to Gladstone camp ground which is about 140km south to Carnarvon. It’s a popular fishing spot apparently, it was pretty quiet while we were there and it only cost us $11 for two nights.
The beach area was small but there was huge mud flats, we splashed in the water, walked the beach and the kids gave their bikes a good go around the campsite.  We spent a bit of time getting school work done, so we only had one art unit left to do for the rest of the term.  We were all looking forward to the school term being over so we could have a well earned holiday.

There were some magnificent sunsets while we were camped at Gladstone.

From the Gladstone campground we headed into Carnarvon.
at Saturday, April 14, 2012

Randomly stumbled across your blog while looking for information about Monkey Mia. Looks like you're having a wonderful time!

Thanks for the message. It certainly is a wonderful country we live in - well worth having a closer look if the opportunity is available!

I really get jealous by the adventure that you have. I also want to have such kind of adventure.