When we were about 2-3 weeks away from Perth, we started thinking about all the things that we needed to do while we were in a ‘big city’ (defined by us as any place with a Coles, Big W or a Kmart!!) and we wrote down a full A4 page of things that we needed to achieve while we were in Perth.  A few of the major items on this list were: dentist appointments for Liz and Mike (which we booked about 2 weeks prior to getting to the city), Samuel’s 4 year old immunisations, a wheel bearing service for the caravan, lots of shopping (Easter shopping, and general shopping), renewing Mike’s Licence which was due to expire in a couple of months, and meeting up with Nanna and Pa after their tour of the South West (including Kalgoorlie, Wave Rock and Esperance).  This was all on top of the other ‘touristy’ things that we wanted to do while we were there, so needless to say, we knew that we would be busy during our time in Perth!


On Sunday the 11th March, we cooked dinner in our trusty Dreampot before we drove from the Baden Powell Campsite in Lane Poole Reserve to a Caravan Park called ‘Advent Park’ on the outskirts of Perth (it was the only campsite in our ‘Camps 5’ book within 50km of Perth).  We pulled into the site and setup the van.  It was another hot day (over 35 degrees) so we decided that we’d enjoy the car air-conditioning and go for a drive into the city to find Kings Park.  With dinner still cooking in the Dreampot (in the boot of the car), we navigated through Perth to Kings Park where we had a beautiful picnic dinner watching the sun set over the city.

We had organised for Samuel’s immunisation to be on Monday at midday.  We had a pretty relaxed morning and then made our way into the city to the immunisation clinic.  Sam was very brave and didn’t even flinch or cry when the first or second needle went in.  He had a sore arm for a few days, but weathered the immunisation really well.  The clinic was very close to Kings Park, so we went back there for a picnic lunch near a huge playground.  After lunch, the kids enjoyed playing on the large dinosaurs and "megafauna" statues that are spread around the park.  They also loved the water sprayers, which spray a fine mist of water all over you.  They all got drenched but it was nice to cool down on another 35 degree day.  After the playground, we went to ‘DNA Tower’ which is a large tower in Kings Park, with a great view over the city.  Later that afternoon we made a start on some of our long shopping list!

About 2-3 weeks before arriving in Perth, part of Liz’s tooth chipped off (we thought it was part of a filling but it ended up being part of the tooth) so we booked a dentist appointment.  Mike thought he would get an appointment at the same time to have a checkup.  It was only a couple of days after we’d made the booking that one of Mike’s teeth started aching.  With only 2 weeks to go till the appointment, Mike was ok to wait, but as the day of the appointment got closer, the tooth started really aching badly, so Mike was quite looking forward to the appointment (although Liz wasn’t soo enthusiastic!).  On the morning of Tuesday the 12th March we had an early start because we dropped the caravan in for a wheel bearing service.  After we'd dropped off the caravan we started making our way to the city.  We were going to catch the train, but the whole Midland line was down due to some failure, so we just drove instead.  Liz and Mike tag-teamed with the kids and both had their appointments.  Liz got her teeth fixed up, but Mike got some bad news because it wasn’t a simple fix – it was either root canal treatment or an extraction for the sore tooth (neither of them were great options but something really had to be done) He also had quite a few other teeth that needed work!.  Mike took a night to think about which option he would take (root canal or extraction).  From that point it was clear to us that we would be seeing quite a bit more of the dentist than we had hoped (and, that we would be staying in Perth longer than we had hoped!).  After the dentist appointments we didn’t do much, just ticked off some more of our long shopping list.


Mike was having to take Panadine to sleep at nights, so was very thankful that he could book another dentist appointment on Wednesday to start root canal treatment on the bad tooth.  So we all drove back into the city and while Mike had his next appointment, Liz took the kids to the Art gallery where they had a look around at some of the art.  They also got the chance to be an artist and they created some masterpieces of their own, which they got to hang in the Art Gallery for anyone to admire.

When Mike was finished at the dentist for the day, we went to the war memorial in Kings Park and had another look over the city from the lookout there.  We then drove down to have a brief look at the bell tower which is near the Ferry Terminals.  We walked around the base of the tower and in the gardens at the bottom, we found some giant headphones made out of ‘Masters’ Milk Cartons.  We decided to head out of the city before the afternoon peak traffic, so we did a little more shopping and went back to the van for dinner.  Mike was very thankful to be able to sleep without Panadine that night because his tooth was no longer throbbing. 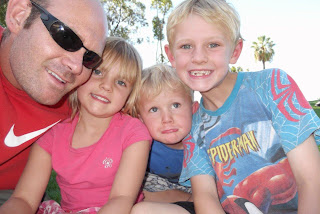 Thursday was a pretty quiet day for us.  We caught up on some schoolwork which had built up a little with such a busy schedule in Perth (although we had managed to get further ahead in our work while we were at Lane Poole Reserve, so we weren’t too far behind).  The kids also rode bikes around the van park.  That afternoon we were awaiting the arrival of Nanna and Pa who were coming back to Perth after completing their loop of the South west corner of Australia.  We were all very excited to see them drive into the park late that day.


On Friday afternoon, we drove Bruiser and Nanna and Pa’s Motorhome in convoy to Fremantle.  We got there at about 3pm and we went to have a look at the markets.  The kids got given a free bird whistle - which they loved.  While we were in Fremantle we had a quick look through the shipwreck galleries which was very fascinating.  After a quick wander around Fremantle, we headed back to the van for dinner.


Saturday Morning was another beautiful, cloudless (and hot) day, and Mike was due to have the second stage root canal in the city, but the Dentist called in sick and the other dentists were not willing to see him.  So Mike had to book another appointment for Tuesday and the following Saturday.  Due to the fact that we had some time back, we all went to Kings Park to have a Picnic lunch with Nanna and Pa.  The kids played at the playgrounds and the water sprayers again and had lots of fun.  After the playground, we all went for a walk to the War Memorial and along a boardwalk in the park.

The Perth public transport system has a weekend deal called a Family Rider which allows a family of up to 7 people to ride any bus, train or the 1 Ferry for $9.30 for the whole day, so we decided that we’d see the city from Public transport.  We drove to Midland Station and hopped on a train into the city.  When we got into the city, we caught a bus to the ferry terminal and caught the ferry across the river and back again – just to have a boat ride.  When we got back to the city side of the river we had a picnic lunch and were given free Milk drinks because the makers of ‘Masters’ milk was having a promotion near the headphone statue they had created.  They were giving away free headphones for people who played a game of “catch the Milk Carton” – which was a bit like a Wii game where you stand in front of a TV and hold a net and try to catch milk cartons that fall down on the TV screen.  Natalie really wanted to have a turn of the game, so Mike and Natalie went over to check it out.  Natalie was too young to play, so Mike played for her.  He caught 86 Milk Cartons which was the highest score of the day so far, so he won a pair of pink Headphones to give to Natalie.  She was very happy with this because they were very good headphones (and they were Pink).

It was now time to start heading home, so we caught the Bus back to the Train station, and caught the train back to Midland and drove back to Advent Park in Maida Vale.  We were all quite exhausted.  We had a BBQ dinner and the kids really wanted a sleepover in the Motorhome (which they had done twice when we met Nanna and Pa a few weeks ago.  Josh got a bit hot in the Motorhome and came back to the van to sleep with his fan on.  Natalie and Sam had a good night’s sleep with Nanna and Pa.